Read more
You are at:Home»Culture»Review: Fiddler on the Roof at The Annex Theatre
By Jenni Derrick on February 12, 2016 Culture, Theatre
80%
80
Fantastic

Fiddler on the Roof has some really great performances and is overall a brilliant show.

LOPSOC’s Fiddler on the Roof is funny, witty, tender and bitter all at the same time! Featuring some really outstanding singing and emotional acting, the show will have you laughing and crying throughout.

The performance opens with Tevye (Joseph Hand) ruminating on tradition, village life and the changing times before moving into the opening number ‘Tradition.’ I was blown away by several things very early on. Firstly, Hand’s accent and vocals were outstanding from the beginning. Secondly, I was impressed by the size of the cast, as it seemed to be endless with them all pulling out of the wings! And finally, I was taken aback by the power of the chorus and the energy created in the opening scene. 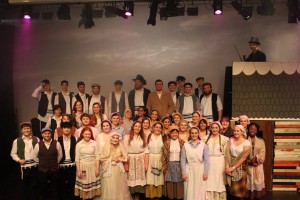 The cast of ‘Fiddler on the Roof’

As mentioned, Hand really completely transformed into Tevye. His comedic timing was spot on and he displayed a lot of dexterity in the role. His tenderness in Tzeitel’s wedding and his anger at Chava’s ceremony were both utterly convincing.

Ellie-Rose Fowler played opposite Hand as his wife Golde, and was equally brilliant. Again her accent and singing were spot on and she totally embraced the sassy nature of her character. Perhaps her best scene was one of the last in the second act, where she played the devastated mother so well that I teared up.

Sophie Brant, Vikie Miller and Natasha Bennetts also deserve a mention for their portrayals of Tzeitel, Hodel and Chava respectively. They managed to distinguish their characters from each other, something other productions of the show have often failed to do, and their rendition of ‘Matchmaker’ was lovely.

The humour of the show was really brought to the forefront in the first act and kept it all very lively. Abby Pardoe as Yente the matchmaker was one of the comedic stars of the shows, providing humourous relief, even in the final scenes. Perhaps the funniest of moment of all was the dance-off in the bar during act 1, where we saw some enthusiastic attempts at Cossack dancing and wine bottle balancing!

Meanwhile, the best staged scene had to be the ‘dream’ sequence, which included a large part of the cast but didn’t feel crowded. The green and purple lighting looked fantastic and created great atmosphere, so kudos to the creative team there! The only thing that could have been improved in terms of the set was the amount of smoke used, as it got really quite oppressive by the second act!

Finally, I’d like to mention the band who played really well considering the difficulty of the music! It was near flawless to my ears and kept the pace of the show going, particularly during slightly clumsy scene changes and some of the extended dance sequences where the energy among the cast dropped slightly.

Overall, it was a really brilliant performance. Running until the 13th of February, I really recommend you go and watch it. Though be warned, you will have ‘If I Were a Rich Man’ stuck in your head for a good few hours afterwards!

Fiddler on the Roof continues at The Annex Theatre until the 13th February. Tickets are available here.