February’s here, so January’s warm winter blanket of familiar drama, Silent Witness, has drawn to a close. It’s been five weeks since I reviewed the show’s opening two-parter, which I described as ‘weak’ and ‘largely overcomplicated’, and I’m pleased to say that its finale, ‘River’s Edge’, is a different story. Although it still has its flaws, it equally has an intriguing plot, with more rounded guest characters and an interesting twist at its conclusion.

As ever, it’s a story of two partS and each episode has a distinctly different feel. When a couple is shot dead whilst enjoying a riverside picnic, a typical Silent Witness scaly detective, D.I. Sally Butcher (Sally Carmen), quickly jumps to conclusions in blaming a spurned ex-husband. However, two minor details suggest that there is more to the case than meets the eye, as a medical student is forced to perform a secret operation at a high-flying London home, and an older detective links the case to one that escaped him ten years previously. 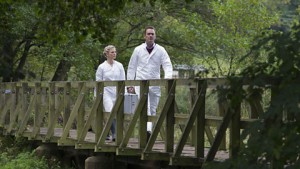 It’s frustrating knowing that you are watching pointless arrests and police inquiry for a good chunk of the first half, but the episode delivers satisfying drama as it approaches its chilling cliffhanger. The realisation by regular pathologists Nikki (Emilia Fox) and Jack (David Caves) that they’ve been ‘looking through the wrong end of the microscope’ and have been looking at the case completely wrong is well performed by the two leads.

The drama, perhaps unusually, runs straight into a dramatic first ten minutes of the concluding episode, which leaves you with bated breath as Nikki and Jack run for their lives in woodland, pursued by a ruthless gunman. However, my issue with the episode lies after this point, as the drama simply fizzles out. The performance of Elen Rhys as a tragic young doctor Amy is good, but if I’m honest, I was confused as to why she didn’t turn to the police far sooner.

It’s an interesting twist for the villainous mass-murderer and rapist, Erich Schrader (Dean Paul Gibson), to escape justice, smirking as he prepares to board a plane out of the country. It’s perhaps good to show that Nikki and Jack can’t solve everything which comes their way, and maybe we haven’t seen the last of Schrader. I think Silent Witness could benefit greatly from a longer running story underneath the week-by-week case stories, and with its 20th series to air next year, this could be the time to do it.

Overall, ‘River’s Edge’ is a much improved outing on ‘After the Fall’. It’s been a rocky series, but it looks like the BBC could be turning out Silent Witness for another 19 years to go, as it remains a favourite on our television screens.

Silent Witness is available for a limited time on BBC iPlayer.