This first episode is both stylish and compelling, drawing you in through a smart combination of flashy action and biting dialogue.

Shadowhunters is the latest adaptation of The Mortal Instruments franchise, available on Freeform (formerly known as ABC Family) and on Netflix. The show launched on the 12th of January 2016 and has recently released its third episode.

Written by Cassandra Clare, the wildly popular first edition of her novel, City of Bones, was released in 2007, which has only been being built upon in recent years, for better or worse. This leaves ample fertile ground for adaptable material, which the fans of the series have been eagerly awaiting after the rather disappointing feature film adaptation in 2013.

The series stars mostly unknown actors, the most recognisable being Isaiah Mustafa as Luke Garroway, the foremost of the ‘Old Spice Guys’ from the viral video The Man Your Man Could Smell Like. The cast have been selected for their appropriateness for the role, rather than their star quality, allowing for more vivid characters, that better resemble their counterparts in the book. However, Alan Van Sprang as the central villain Valentine Morganstern is a laughable exception to this rule, both physically and thematically, as the script seems to ignore many of the facets of the character for the sake of simplicity. 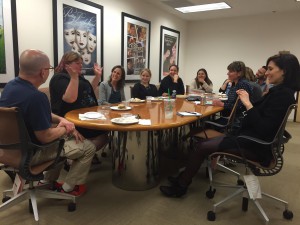 A strong theme present in the casting is the use of people of colour across the roles, with many characters previously depicted as white, being re-imagined with a diverse cast of actors, notably, the Lightwood family has been cast with Latino actors. Clary’s adoptive father, Luke is now a black actor, and Dot is played by an Asian actress. This combined with the presence of LGBT characters, makes The Mortal Instruments a remarkably progressive presence in modern television.

The production values of the original feature film were nothing to scoff at, making the production very adept in both stunt work and visual effects. So far, it seems the television series improves upon this, adding more sophisticated visual effects, and higher quality costume design and weapon props.

The first episode, ‘The Mortal Cup’, introduces us to the main cast and the early incidents of the plotline, altering certain events, occupations and circumstances, as well as peppering in a few new characters. Clary (Katherine McNamara), Simon (Alberto Rosende), Jace (Dominic Sherwood), Isabelle (Emeraude Toubia) and Alec (Matthew Daddario) all seem unchanged from their characterisations in the books, with the exception that their dialogue feels much snappier and believable, with their book equivalents still finding their feet in the initial novel. However, a few changes are aparent, Madame Dorothea, the power hungry, heavyset witch who lives underneath Clary’s apartment is now Dot (Vanessa Matsui), a long time family friend who strives to protect Clary and her Mother from Valentine. And Maureen (Shailene Garnett) enters the story much earlier, being previously introduced in the fourth book, leading to rumours that she will merge the characters of Maureen and Maia Roberts. 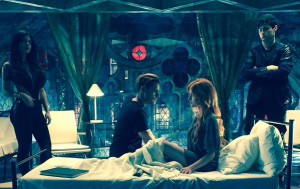 Clary wakes up at the Institute, surrounded with Shadowhunters

Interactions between the characters are both endearing and original; with witty humour and sharp comebacks all around. The show is gloriously camp and entertaining, resembling a modern Buffy The Vampire Slayer, where sex and sexuality play a stronger, more apparent role.

Clary Fray is transformed from the helpless, incapable girl she was in the first book, into a strong woman likely to attract the eye of the incredibly discerning Jace Wayland, strengthening their romantic motivation. Unlike in the book, Clary outright tells Jace she’s “Uninterested in his supernatural fight club”, clearly unimpressed with his hunky looks and hyper masculine appeal, filling him with an unspoken respect for her resolve.

Shadowhunters: The Mortal Instruments is available on Netflix.