Read more
You are at:Home»Culture»Review: A Midsummer Night’s Dream at the Nuffield Theatre
By Emily Sims on January 29, 2016 Culture, Theatre
80%
80
Brilliant

A slick show with some impressive performances and simple but effective stage design.

On the 400th anniversary of Shakespeare’s death, Southampton University Players have decided to tackle one of his best loved comedies. Their decision to create a more stripped back and modern version of the classic tale is one that works well, and they certainly succeed in attaining the right balance between word-play and slapstick during the comical scenes.

For the majority of the performance, the stage was primarily devoid of props- bar a few draped curtains, which served to create spaces for the characters to jump into and hide. However, the cast proved that this was all they really needed. Two large tables are the only objects that aid the imagination, as the story relies instead on lighting to indicate that scenes are taking place in the forest. Although at times this felt a little sparse, it meant that the actors had more open space in which to perform and, on several occasions, sleep.

In the same vein, costumes were not what you would immediately associate with Shakespeare- some of the women wore heels, some wore no shoes at all- and whilst costumes in the Pyramus and Thisbe play at the end were convincing, others like that of Puck the fairy seemed almost thrown-together. However, the childishness of her bright costume reflected the character’s mischievous nature. 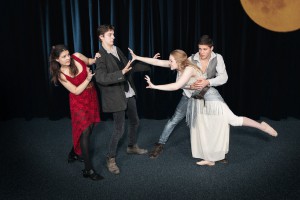 On the subject of characters, everyone seemed to fit their roles almost perfectly, resulting in some fantastic performances. Hermia (Frankie Payne) was fiercely determined to hold onto Lysander (Dan Hallett), her passionate lover, who was capable of pulling off both romance and comedy. Demetrius (Chris Gardner), the sneering yet quirky man intended for Hermia by her mother, pairs well with the elegant but somewhat stroppy Helena (Katrina Smith), as they finally unite for a happy ending. The intended contrast between these lovers and the craftsmen who create the play-within-a-play is one of the great successes of this production. Meanwhile the exaggerated use of regional accents, particularly in the arrogant but strangely loveable character of Bottom (Jane Beesley), was entertaining without ever becoming tiresome.

At points in the first act the action felt slightly stagnated, thanks to a general lack of movement. However, during the second part the play really found its feet and came to life in a way that built on what had worked beforehand. The comical scenes did not feel too silly or clichéd, which can be a danger with such a well-known story. Indeed, the moments of comedy were where the actors truly came into their own. The two rivalling men performed brilliantly together as they fought for the love of Helena, ending in a wonderfully awkward spooning scene. The lovers, alongside Theseus and Hippolyta, watch with the audience as the craftsmen perform their clumsy play- the audience became particularly fond of the group of misfits, as their show is naturally a disaster. Adam Taussik, Paul Cresser and Andrew Clarke give such well-fitted performances as Snout, Flute and Snug, that it is impossible not to laugh.

Director Chris Hawley’s objective to make Shakespeare accessible is something that has made this a production that is thoroughly enjoyable for its audience. The words are the focus throughout, but the Players’ excellent group of actors bring them alive in a simply designed and perfectly executed production, that captures the humour, and also the magic, of this timeless story.

A Midsummer Night’s Dream continues at the Nuffield Theatre until the 30th of January. Tickets are available here.