Despite some frustrating aspects in the puzzle and navigation departments, Resident Evil is still one of the exemplary cases that all horror games should look to. Zero is pretty good too.

As far as falls from grace go, you can’t get much more dramatic than Resident Evil’s spectacular downward spiral. Once the final word in survival horror, the series now feels like a tired old rock star, desperately clinging onto their glory days, trying to convince us that they’re still relevant, whilst tarnishing the memories of even the most devoted fans. It’s hard to believe that the pinnacle of the franchise’s accomplishments (the impeccable Resi 4) is almost ten years old now. Since then, it feels like Capcom have made an almost deliberate effort to fly in the face of everything that fans held dear. Forced co-op in a horror game renowned for its sense of isolation and vulnerability, Michael Bay-esque action sequences, and a total absence of scares; each and every USP of the franchise has been methodically exorcised over time, in order to try and appeal to a wider audience more accustomed to the likes of Call of Duty and Gears of War.

With the newer games being in such a sorry state, it has reached the point where the HD remasters are actually the worthier purchases. Opting to ride the nostalgia train as far it will go, Capcom are now churning out remasters and remakes on an annual basis, so as to to keep faith in the franchise alive, as opposed to actually attempting to fix the problems it currently has. Resident Evil: Origins Collection is the result of the first two years of this strategy, with a bundle release of 2015’s Resident Evil HD Remaster and this year’s Resident Evil Zero Remaster. 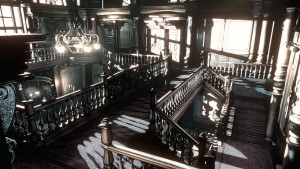 Putting aside the fact that it would be nice if Capcom would get their shit together and actually make a new (good) Resident Evil game, the remasters themselves are of a very high standard, offering polished visuals and a more intuitive control option. Meanwhile, the core games are just as good as they ever were. The first Resident Evil in particular is a benchmark for horror gaming, and introduced many of the tropes that still endure to this day. From limited ammo supplies, to an emphasis on exploration and puzzle solving, right through to the innovative health system and fixed camera angles; if it’s a big part of horror gaming, it can be traced to Resident Evil. Of course, there was already a remake on the Gamecube way back in 2002, and it’s that version of the title that has received the remastering treatment.

The game features some of the most sophisticated scares in the medium’s history, including genuinely masterful jump scares (a phrase you don’t hear often), horrifying boss battles and a heavy dose of ultra violence. Most of this is due to the highly directed style of the in-game sections. Where other games are designed more organically, allowing the player to have control of the camera, the pacing, or the order in which events are tackled, Resident Evil ensures that everything happens exactly as it was meant to. Whilst this may initially sound restrictive and stifling, it actually means that you get a very controlled and deliberate experience, akin to a thoroughly well written novel or an expertly made film. Each and every frame has been carefully considered to optimise the perfect lighting and composition. Every sound is timed perfectly to catch you off guard. Where so many modern horror games simply throw you into an overly dark environment and have an obnoxious Slender rip off stalk you around and occasionally startle you with a loud noise, Resident Evil shows that a bog-standard zombie encounter can be far more effective provided that it’s well executed.

The intricate puzzle box that is the game’s central location, Spencer Mansion, unlocks piece by piece, as you search for various items to unlock doors and passages. It’s a master stroke in both game design and structure, as the layers of the setting peel back one by one. The constant backtracking may get a little tiresome, but in a time where most AAA games jump on the open-world bandwagon, it’s nice to play in a contained and well thought out location. You become familiar with every crevice of the mansion, as you go back and forth between rooms, trying to slowly progress further into the game. 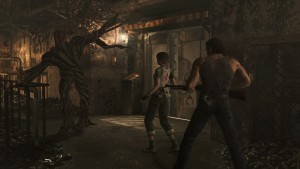 Resident Evil Zero is less outstanding, but still has its moments. One of the most surprising things is that the game’s introduction of an AI partner character doesn’t undermine the sense of horror, but actually escalates it. Instead of feeling like you’re twice as strong and twice as capable to deal with your enemies, you actually feel like you’re twice as vulnerable and twice as exposed, as you are forced to share health items and ammo between the two characters. Later Resident Evil games fumbled on this account, and removed the horror element altogether in service of a conventional co-op campaign, making it feel like any other action game.

Equally, some of Zero’s enemy designs are incredible, with the infamous leech zombies proving to be both formidable and terrifying foe. However, aside from an unconventional opening sequence on-board a moving train, the game then begins to go over too much familiar territory from the first game, with similar scenarios, locations and problems cropping up throughout. Additionally, some of the puzzles relying on the two separate characters working together can be excruciating, thanks to a messy item exchange menu and unnecessary faffing around to get the protagonists to cooperate as intended. Resident Evil puzzles are downright Kafka-esque at the best of times, employing logic that would have the fucking Riddler scratching his head in befuddlement, so to add in an extra spanner in the works can be aggravating to say the least.

Still, both games offer everything you’d want from a traditional horror experience. If next year’s Resident Evil 2 remake is up to the same standard, we could be in for something truly special, seeing as Resident Evil 2 is when the games went from great, to truly spectacular. Whilst the slow pacing and frustrating puzzles and controls may be off-putting for some, fans of old-school horror games will find this to be an essential purchase. After all, what better way is there to get your horror game fix, than from one of the forerunners of the genre?

Resident Evil: Origins Collection is available now on Xbox One and PS4.