With praise due for its characterisation and unique humanisation of otherwise inhumane acts, Flight is nevertheless letdown by its laboriously artful sequences. 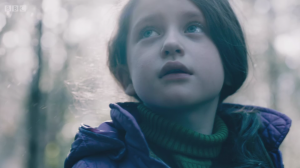 The opening of ‘Flight’ removes us from the comfort of the Lyell Centre and transports us to the gritty, 1995 setting of Bosnia. It’s both harrowing and gripping, as we are shown the frightened, blue eyes of a young girl, as she watches her father being shot right in front of her – bringing to light the familial effect of the 1995 Bosnian Genocide, that led to the massacre of 8,000 Bosnian Muslim men and boys.

We then return to London, where a Muslim anti-extremist, Amir Aziz, is found murdered in his mosque. In true Silent Witness fashion, you can’t escape the notion that the two scenes will, inevitably, be connected, despite their spatial and temporal removal from each other. Thankfully, these two episodes do not conform to the same Silent Witness pattern we usually expect: the slow, piecing together of the jigsaw of the first episode and then a second episode packed with action as everything unravels before our eyes. The thing is, I’m not sure if the 90 minutes in total spent piecing the jigsaw together makes for a more interesting watch.

With laborious (although unmistakably artful) sequences of juxtaposition, involving the movements of Sarah Begovic, a young British Muslim turned extremist, who returns to the UK as a drug mule with her child, and the parallel work of Dr. Thomas Chamberlain, Dr. Nikki Alexander, and Jack Hodgson, things start to  feel a little drawn out. Our link between the two cases is provided by  a phonecall between the victim and Sarah Begovic, who is confirmed to be linked to the terrorism department.

The flashback to the death of Begovic’s father comes to be a bleak, recurring image throughout the two episodes, right up until the conclusion. It serves to shape our understanding of her actions, in a way that isn’t awarded to her partner Zack. At the heart of these two episodes is a focus on family ties, and the difficulties posed when wanting to protect your children prevents you from doing the right thing. The relationship between Begovic and her son is an interesting one, with her son being used as a bargaining tool to keep her on board with her and her partner’s plans for the UK. Perhaps the most unsettling scene of the two episodes is the image of Zack’s fatherly love for his son, when the knowledge of his violent actions come to light.  In the finale, the tie between mother and son is mirrored by DI Nina Ryman (who is shot at the conclusion of the first episode, with a chilling shot of her laying on the tarmac), as she finishes the episodes with ‘we’ve got to look after our kids.’ In light of the events of the second episode, this has an upsetting resonance.

‘Flight’ poses an interesting conversation about the sensitive subject of terrorism and its relation to the Muslim religion. It holds a conversation with the use of the religion as a scapegoat for any act of terrorism, whilst at the same time providing us with a direct link between Muslim extremists and terrorism. At times its progressive, at other times it falls to the misconceptions held within society. To disguise themselves, Sarah and Zack ‘westernise’ their image- as if looking Western is the perfect cover for a terrorist. In this, the episode falls prey to the perception that terrorism is not a Western thing, by providing Western clothes as the perfect cover for two potential terrorists. 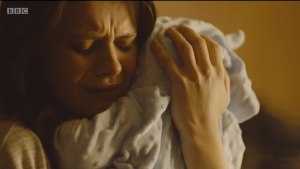 Touching scenes between Sarah Begovic and her son

The strengths in the episodes emerge in the form of Sarah Begovic, whose icy blue eyes hold your gaze throughout the narrative. She’s quite a captivating character, simultaneously in control and utterly over her head, as she tries desperately to protect her child. Her status as a mother universalises her character, and the myriad of closeups used throughout the episode force audience identification with her.

‘Flight’ provides an interesting look at the human side of terrorist involvement, with its slow pace allowing an emotional insight into its characters, rather than being fueled by action and serial murders. That said, at times its narrative elements are problematic, but it is gripping enough in its presentation of its characters to keep you intrigued.

Silent Witness airs on Mondays and Tuesdays at 9pm on BBC1.