Read more
You are at:Home»Culture»Review: And Then There Were None
By James Barker on December 31, 2015 Culture, Television
100%
100
Breathtaking

Agatha Christie's most popular book is converted to the screen into a work of art, with stunning performances from an all star cast

I’m a fan of a good bit of detective fiction. I loved the comical adventures of the Belgian sleuth Hercule Poirot, whose show ran for 24 years on ITV; I’ve dipped into the more cosy cases of Miss Marple as well. So when I saw an adaptation of Agatha Christie’s most popular book was coming to the BBC over Christmas, it was instantly put on series record.

However, And Then There Were None is a thousand miles from the twirls of Poirot’s distinctive moustache. Seven men and three women journey to Soldier Island, a small rocky crag with a gleaming white mansion standing at its centre, where they are to dine with the mysterious Owens, whom none of them have ever actually met. They find their hosts inexplicably absent, and when a record blares out that each of them are guilty of a murder, they realise something far more sinister is afoot. Their only clue to the horrific events unfolding, is a poem framed in every room, which details the deaths of ‘ten little soldiers’. 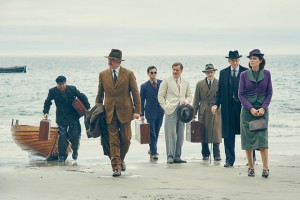 At its core, And Then There Were None is a psychological thriller. Where in other Christie stories there are the likes of Poirot and Miss Marple on the case, what makes this tale is that there is nobody to unravel this mystery, snatching away any sort of comfort blanket you usually have. In this show, nobody is coming to save you, nobody’s even able to work out what exactly is going on. It’s terrifying.

The screenplay is written by veteran EastEnders writer Sarah Phelps, whose eerie spin on the story enhances the fear factor further. Although the actual events are not supernatural, the characters are seen haunted by the ghosts of their misdeeds, and we get brief glimpses of the terrible things they have all done in their past. A mention must also go to the show’s musical score, which puts the hairs on the back of your neck on end. 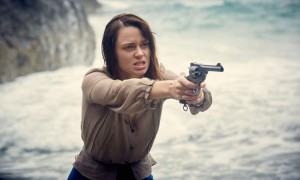 Maeve Dermody is captivating as the enigmatic Vera Claythorpe

It’s an all star cast, including Jurassic Park‘s Sam Neill, Game of Thrones‘ Charles Dance, and man of the moment, Poldark star Aiden Turner. However, the standout star is a relatively unknown face, Maeve Dermody, who is stunningly complex in her portrayal of the youngest woman amongst the ten, Vera Claythorpe. Vera transforms from a despairing damsel into the strongest member of the group, but her innocence is soon blackened by the skeletons in her closet. Dermody keeps the viewer on edge in her portrayal, leaving her morals in question right up to the closing scenes.

It’s a bleak but gripping watch, as the characters are mercilessly picked off one by one. And Then There Were None is a work of art, quite unlike any show I’ve watched all year.

The three parts of And Then There Were None are now available on BBC iPlayer.