On Christmas Day, as is tradition, many families were gathered around the telly in the afternoon for the Doctor Who Christmas Special. It was past lunchtime, and the older members of the family will have likely knocked back a few sherries, so it was subsequently the fun and comedic episode that we are all after. After the dark and heavy tone of Season 9, which concluded earlier this month, it’s a welcome change to show Peter Capaldi’s more fun side as the Doctor. At one point, the Doctor giggles at the vengeful screams of a talking head they have stolen, zipped up in a handbag: ‘I can’t approve of any of this you know, but I haven’t laughed in a long time.’ 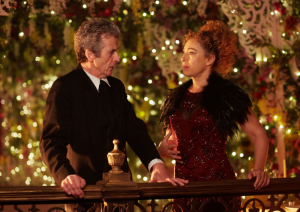 Alex Kingston is a welcome return to the show as River Song, after an absence of two seasons. Some would argue that River’s story was all wrapped up alongside that of Matt Smith’s incarnation, but this isn’t about her hugely complicated story arc (which I myself wasn’t a huge fan of). It is simply about the chemistry between her and Peter Capaldi’s Twelfth Doctor, a new pairing for the show. In an role reversal of her first episode (‘Silence in the Library’, back with David Tennant in 2008), River spends the majority of the episode unaware of who the Doctor is. It is used as a source of humour at points, but you can see it’s oddly painful for the Doctor, as River insists, still oblivious of his identity, that the Doctor never truly loved her.

The episode falls down with its supporting characters – a criticism that I often have of the show as a whole. Big comedy names Greg Davies and Matt Lucas guest star, with Davies as the episode’s frankly-ridiculous villain King Hydroflax, who spends the majority of the episode being carted around as just a head in River Song’s handbag, screaming insults and threats which our heroes ignore. Matt Lucas is wasted as Nardole, a friend of River’s that Hydroflax’s robot ends up taking the head of, and using as a source of information for locating the King. Although they quip a number of funny one liners (Lucas, as a head, held inside the robot, remarking ‘It really stinks down here’), they give the episode very little danger factor. 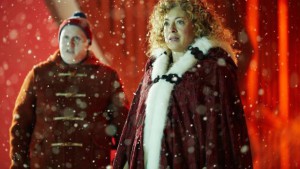 But ultimately, the episode is enjoyable, purely for the return of River. Moffat was right to pair her with Capaldi; I would even go as far to say that they are the most natural River/Doctor duo, as I always found the chemistry between Alex Kingston and Matt Smith confused and forced. However, the episode should also mark a last hurrah for River; her character is done now, and prolonging her time with Doctor Who any longer risks spoiling her.

Doctor Who is expected to return for a tenth season late next year.