Battlefront is a great looking and great playing Star Wars game that shouldn't be missed.

The wait for a new console Star Wars game has taken half a decade, the last time being 2010’s The Force Unleashed 2. EA’s recent buyout of the licence led fans to hope that many dormant series would be revived. Cleverly, EA choose to bring back one of the best selling Star Wars games under the direction of FPS veterans DICE. The result is a great looking and authentic Star Wars experience, with accessible gameplay. It’s slightly let down by EA’s corporate meddling and lack of content compared to other shooters, but any fan of the original trilogy will find an enjoyable experience in Battlefront.

The game’s greatest strength is in the reverence it pays to the classic films through its sound design and graphics.

Star Wars has never looked better in a video game, thanks in large part to DICE’s frostbite engine. The ice covered planet of Hoth looks amazing and its tiny details, such as the footprints of AT-AT’s or snow slowly covering the player, really contribute to the immersion. Others like the forest moon of Endor show off amazing sunlight streaming through giant canopies. While the planets looks great, it is the design of the Star Wars‘ vehicles, characters and effects that really make it authentic. When blaster fire hits the surrounding environment white sparks fly out, directly mimicking the original trilogy’s special effects. All the iconic sounds, from the Tie fighters screeching to the AT-AT’s blaster fire, are lifted right out of the films and enhanced to fit the game. These features really make you feel that you are part of a large scale battle in the Star Wars universe.

In terms of gameplay and structure, the main crux of the game is a bit of a departure from Dice’a traditional series Battlefield. It has been simplified to entice people who may not be hardcore FPS fans, but are huge Star Wars fans. While I have been a long time Battlefield and Call of Duty player, I find the simplification refreshing and the game is more fun as a result. There are no classes, instead you choose one of 11 blasters, as well as three perks. These can range from grenades and sniper rifles, to jet packs and personal shields, which all have a cool-down period before further use. This creates varied play styles and helps add a little depth to the game.

In my opinion, this structure minimizes the frustration found in other FPS, like being constantly sniped from across the map or bombarded with grenades. My only real concern with the set up is the lack of unlockables. There are several different faces you can use for you imperial or rebel character, but only having 11 primary weapons is disappointing. I can appreciate that DICE were limited in this regard by the original trilogy’s comparative small universe. When compared to that of the prequels, the first three films don’t really allow opportunity for a diverse set of weapons. 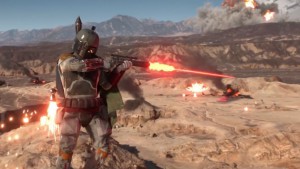 The standout game mode of Battlefront is the 40-player multiplayer maps of ‘Walker assault’. This pits the rebels against one or two impending AT-AT’s, which must be destroyed before they reach their specific target. The only way to make their armour vulnerable is to capture two control points which, if held for long enough, call in B-wing bombers to expose the AT-AT’s to small arms fire. It encompasses the best of Battlefront, with huge infantry engagements taking place as star-fighters dogfight overhead. Add in the ability to play as three rebel heroes or three imperial villains, containing the likes of Darth Vader, Luke Skywalker and Boba Fett, and battles can get extremely hectic.

While Walker Assault is no doubt enjoyable, my personal favourite game mode is ‘fighter squadron’. This is an exclusively star-fighter based game mode, that pits 10 vs 10 . It is frantic fun and is on a huge scale, as many AI pilots are added to boost the number of combatants. The only downside to this mode is that the Imperial fighters feel greatly underpowered and I often racked up far more kills using the dominant rebel A-wing. If these modes don’t 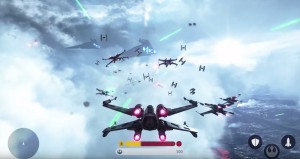 interest you, there are numerous others, such as standard team death-matches, objective based modes and hero hunt. The latter has one player assume the role of a hero and the other 7 players try to kill them, with the victor then becoming the hero. These smaller scale modes have a number of maps which are not found in the other match types. This makes the game feel smaller in content, as the most popular and fun modes only have four maps each and this can make extended play feel slightly repetitive.

Battlefront does have non-competitive modes. It has single player missions that act as tutorials, with the standout being a speeder bike chase through Endor. It also has a co-op mode, which sees you and one other player fight through increasingly difficult waves of imperial forces. These are fun distractions, but the meat of the game lies in its competitive multiplayer.

Battlefront has never pretended to be something it wasn’t, and criticising a game for not having a single player campaign when it hasn’t really claimed too isn’t fair. What if offers is extremely fun and accessible gameplay, set in the most authentic video game version of the Star Wars world. While it doesn’t lack in content, it feels as though it does, as the most fun modes do not have enough maps and it feels like EA and DICE could have included a few more. Nevertheless Battlefront is a perfect piece of media to whet your appetite before The Force Awakens releases this month.

Star Wars Battlefront is available now on Xbox One, PS4 and PC.