Read more
You are at:Home»Culture»Review: The Ritual on Weylyn Island
By Thomas Davies on December 14, 2015 Culture, Video Games
40%
40
A Mixed Bag

Fantastic first half, dismal second half, but a good first attempt by new contender Zemagamez

I’ve got to make a confession here, guys. Something that’s been weighing on my chest for sometime. I hope that you can all see it in your hearts to still understand and love me as the same person you once thought that I was. What I am about to say may shock you. Okay… here goes…

There. I said it alright? I like walking simulators. Love ‘em in fact. Love them so much that I would encourage everybody to play and experience them. I like them particularly when, due to their less ‘active’ nature, they work to find new ways to engage the player. Gone Home is a good example of a game doing this. Everybody’s Gone to the Rapture, as emotional and picturesque as it was, is not.

Luckily The Ritual on Weylyn Island, the first non-mobile title by developer Zemagamez, is more of a Gone Home than an Everybody’s Gone to the Rapture, taking huge advantage of the lack of ‘active’ player involvement to eke out some marvelous horror. For the first three chapters. Then it turns into ‘The Quick-Time-Event of Weylyn Island’.

I’m not going to lie, my opinion on this game is very divided. The first half is fantastic, it takes huge advantage of its horror genre, without even using jump scares. The game at one point had me throw my headphones across the room and take a five-minute break. The story starts out interesting and the setting seems quite grounded and clever. But then, the second half of the game just… doesn’t do any of that.

The first two chapters stand out in particular, taking a huge leaf out of Gone Home’s book, and allowing you to explore and piece together the story. It’s a nice way to start the game; while there is some horror in there, it’s not until the second chapter where it gets incredibly ramped up. I’ll admit, I generally don’t find cults scary in… well, just about anything, but the cult in Weylyn Island scared the shit out of me. I’m used to games where the monsters chase you, but this time you encounter them on your path, and their presence is a universal signal to go the other fucking way quickly.

The clever blend of story and gameplay must be commended in 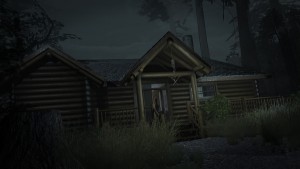 this early half. I genuinely can’t see the story of these early chapters being told in a platformer, or a shooter, or a racing game. Part of what gets the adrenaline pumping is the context. You are alone, defenseless, on an island in the middle of nowhere, and everybody seems to want to kill you. All you can do is run. The use of Celtic/Irish mythology in the setting also creates a tapestry of interesting backstory, to add to the finely crafted horror and immersive world.

But then, there’s the second half. The half where everything good that the game does, immediately falls apart. And trust me, the difference is immediately noticeable. The third chapter starts to crumble, with an overemphasis on quick time events, and puzzles that amount to ‘running around searching for the thing that advances you to the next part’, but it still keeps in the tense horror that made the first two chapters so much fun.

But shortly after, we’re no longer given that sublime sense of fear. I can’t tell if it was over-reliance on the concept that caused me to grow bored of it, or if it was the direction the story took that removed some of the horror out of it, but as soon as there was a face attached to the forces that were after you, I immediately lost interest.

This gets even worse when you’re placed in the caves, and all of a sudden, the game ceases to play around with its use of the ‘walking simulator’ genre, and turns into just wandering in a cave for a bit. There’s an occasional puzzle, but nothing particularly challenging and, again, the monsters feel a bit more lifeless, a bit more artificial. You’re ultimately railroaded into a long story section, where you don’t feel like you have any real authority. But it was the granting of that authority that made the game so effective in the initial half. It also doesn’t help that the ending is just flat-out weak. Without wishing to spoil anything, the final twist attempts to make the player reassess their actions in the story, but actually causes certain parts of the game to retroactively feel forced. Not a ‘Ohhh, I see what you were doing there’, and more of a ‘Oh, that’s why you did that’

Strong, stoic protagonists are actually alright, and I admire the developer’s attempts to write a strong female player character, unlike Tomb Raider’s attempts to convince us that their current portrayal of Lara Croft is ‘strong’. That said, strength should not be confused for apathy. It was difficult, certainly for me, to find myself relating to a protagonist who’s strongest sentiment about what’s going on is that it’s ‘a bit weird’. The second half, again, is worse for this than the first half, but they are both guilty of it. When I’m absolutely petrified, it’s very disconcerting that the character you’re supposed to be projecting onto can only react with a snide, snarky remark. I suppose this is why silent protagonists are usually employed in horror games, as it allows player-projection to a much more significant degree. But, this being said, Zemagamez should at least be commended for breaking the mold and trying something new.

Would I recommend this game? Probably not. Any enjoyment you receive from the first half is stamped out in the second half, and the ending will leave a bitter taste in your mouth. In spite of this, I would definitely say that Zemagamez are a company to watch, and I am assured that most of the problems in this game are just growing pains from a company that’s taking its first foray into non-mobile gaming. I’ll certainly be buying whatever their next title is, and I would recommend that people at least keep an eye on them in future.

The Ritual on Weylyn Island is available now on Steam.