A breathtaking finale with wonderful performances from leads Peter Capaldi and Jenna Coleman.

It’s been a rollercoaster of a season for Doctor Who. After several years of lackluster storytelling, gaping plot holes, and character arcs so difficult to follow that you just want to give up, Steven Moffat (Who’s Head Honcho) has brought the show back to what works; and it’s been a big success.

What works, you ask? Well, that’s a simple answer; one crazy Time Lord and one fun loving companion, spinning around time and space, saving lives and having a whale of a time as they do so. This series has been driven by its two leads, Peter Capaldi and Jenna Coleman. Capaldi is the oldest and darkest Doctor we have seen since the revival, but where this fact cast a shadow over the previous season (Capaldi’s first as the Doctor), we have seen a new side to him since; one of fun and eccentricity, which makes him a joy to watch. By his side is Clara Oswald (Coleman), who’s in her third season as the Doctor’s companion, or ‘carer’, as she likes to put it. Where previous character arcs for Clara have dragged away from her having an actual personality, Moffat has made it all about the Doctor and Clara’s relationship this season, and their dependence upon each other. It’s fascinating watching and waiting for their careless travelling to fall apart, and things really do in this year’s three part finale, with consequences that drive the Doctor into the darkest place, I would argue, that we have ever seen him in.

In the first part of the finale, it seems like another classic romp with the Doctor and Clara, but two thirds of the way in, it takes a huge turn, into some of the most emotive scenes I’ve ever seen on Who. In trying to save the day, Clara puts herself in the firing line and for once, the Doctor is powerless to save her. In the process, we are given the first companion death of the revived series.

The Doctor is not given any time to recover however, as he is immediately thrown into a trap. The second part of the finale is one that will go down in Who history without a doubt. The Doctor is the only speaking part, as he faces off with a silent, yet menacing monster, that has been sent to drive his darkest secrets out of him. Where Coleman (a notable presence despite her absence from this episode) was given the chance to shine in the previous episode, this is Capaldi’s time in the spotlight, demonstrating his range as an actor. At the end of the episode comes the biggest shock though (if it hasn’t already been spoiled by BBC One publicity, that is), when the Doctor escapes his trap to return to Gallifrey, his long lost homeworld.

Episode 12 starts off as good old sci-fi nonsense, appealing to the fans. The Doctor is broodingly silent for a good 15 minutes, as the Time Lords fret over what to do with him. However, it’s about half way through that the plot begins to unravel. The Doctor’s return is revealed as one big plan to save Clara from dying two episodes earlier; plucking her from the moment before her death, and running from his homeworld like he did all those years ago. In this action, they are revealed as the Hybrid, a destructive combination of Time Lord and Human, that is destined to destroy the universe, as Clara’s survival is a paradox which means the destruction of the universe.

After eleven episodes of managing to avoid anything mind-boggling, we end up back in Moffat’s baffling world of absolutely absurd plot lines, but I find myself not caring one bit. Capaldi and Coleman’s performances just dominate every scene, so you don’t care about the gaping plot holes or absurd reasoning. 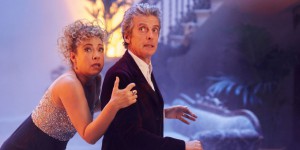 Of course, it all ends with the Doctor having to say an emotive goodbye to Clara. After three seasons of Coleman in the TARDIS, I wouldn’t have thought that I would be sad to see her go; but with this series she has delivered an award worthy performance, especially when it comes to her partnership with Peter Capaldi. All in all, this season of Doctor Who has gone from strength to strength. Hopefully Moffat can continue this streak of brilliance with the return of Alex Kingston as River Song this Christmas, and the arrival of a new companion next year.

Doctor Who returns on Christmas Day at 5.15.