With a dizzying amount of stuff to see and do, Fallout 4 is everything an open world game should be. Fun, imaginative, deep and thoroughly immersive. You won't need to buy another game for months.

The down side is that Fallout 4 had monumental pressure placed upon its shoulders. It basically had to be the second coming of Christ and if it was anything less than that, there would be hell to pay. And sure enough there was. You can’t please everyone, and you certainly can’t when it comes to gamers. Everyone had an exact idea of what they wanted this game to be and by now you’ll know if you think it’s the game of the year, or the biggest letdown since Destiny.

I myself am in the former camp. I love Fallout 4, and in a way that I haven’t loved a game in a long time. I’m completely addicted and fully immersed. I’m constantly discovering new things (there’s a cover system! I can put a hat on my dog!) and meeting brilliant new characters. Every time I feel like I’ve seen enough to make a final verdict, I peel away another layer and realize that I’ve only been scratching the surface.

For those somehow in the dark, Fallout is set in a post-apocalyptic world loosely reminiscent of that seen in the Mad Max films. The comparisons between the two only go so far however and Fallout has a unique identity all of its own. The series envisions a post-apocalyptic world set in an alternative universe in which atomic power became the dominant source of energy. As a result, a widely different history emerged, creating something like the 1950’s version of what the future would look like. That is until the bombs hit. Now the world is a shadow of its former self, overrun with raiders, mutated animals and hazardous radiation.

Being a Bethesda game, the majority of the emphasis here is on freedom. The second that you leave the vault, the world is ripe for exploration. From scavenging the wastes for salvage, to mingling with locals in fully functioning settlements, there’s no shortage of things to do. 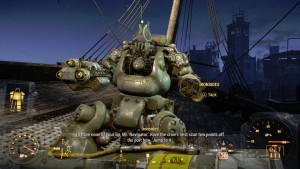 The side quests are, as expected, beyond plentiful, with many feeling especially distinct and memorable. For instance, there’s one in which you can either help or attack a ship run by robot sailors, all of whom have adopted old timey accents and wear maritime hats. Or there’s the one in which you visit Covenant, a town which enforces a mandatory personality test upon any potential visitors, in order to ensure that they are human and not synthetic. It’s this new tension between human beings and ‘synths’ that forms the backbone of many of the quests. It’s also one of the things that you’ll most regularly portray your character in relation to, as many factions and companions have strong pro or anti synth views.

Of course, there’s still plenty of variety on offer, with quests dealing in everything from helping an awkward radio DJ find his confidence, to breaking up a Thunderdome-esque fighting arena. This variety also extends to the activities you can indulge in outside of quests, with hacking, lock-picking, sneaking, crafting and community building all functioning as core gameplay mechanics. What’s great about these elements is that they feel simultaneously intuitive, rewarding, and entirely optional. As someone who usually loathes the laborious busy work of collecting together bit-and-bobs to upgrade a weapon, I actually found it worthwhile here. I even started to become attached to certain weapons as I customised them in meaningful and noticeable ways.

Outside of the quests are small little pieces of backstory and history that really help to flesh out the world. These stories are often articulated via terminal logs and range from the comical, to the downright tragic. On the former side, there’s the story of a troubled comic-book movie adaptation, that feels detailed and authentic enough to be real. Meanwhile, some of these little narratives are at the more devastating end of the emotional spectrum. I once stumbled across a fisherman’s shack and read his diary entries, which revealed that his wife had died and left him alone for years. He attempted to make the best of life without her, until one day he dropped the only reminder he had left of her at the bottom of a lake. With nothing left to live for, he decided to go into the irradiated water to recover the locket. Sure enough, I swam to the deepest depths of the lake and discovered his skeletal remains.

It’s these little moments, where you experience narratives that have already occurred, that prove to be some of Fallout 4’s emotional high points. Of course the main storyline also packs a punch, and an early death scene is particularly affecting.

Combat and enemy design has been reworked almost entirely. The game now works well as an FPS in its own right, and V.A.T.S is no longer the only way to enjoy fighting (although it is still the best way). All of the enemy types feel much more idiosyncratic this time around as well, with their own special behaviour and attacks. Particular mention goes to the Feral Ghouls, who now have their own very unique movement style, in which they clamber over obstacles, and continue advancing even after their limbs are severed. Deathclaws have similarly been revamped, and now feel much more like mini-boss battles, making each encounter with them legitimately intense. 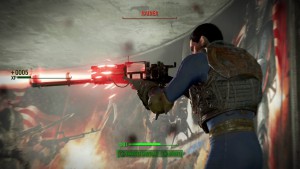 One of the most obvious changes to combat is in how power armor works. In previous games, the iconic suits felt like any other piece of apparel, and were only distinguishable by their higher protection stats. Now, power amour is more in line with an Iron Man suit, or even a walking tank. It can change the dynamic of a battle significantly, turning you into a powerful bad-ass. Like almost everything in the game, it can also be personalised in really cool ways. For example, you can give it a jet-pack, or even stealth camouflage.

Like the combat, the dialogue system has also been adapted, to much controversy. In previous Fallout games you controlled a silent protagonist and selected from numerous, wide ranging speech options. These options traditionally covered all manner of possible character types; from intelligent to suave, kind or cruel and so on. Now, there’s more of a sense of railroading, as only 4 options will ever be available for selection, sometimes all quite similar to one another. Additionally,  your character actually speaks, giving them more of a predetermined personality. Whilst this may seem disappointingly limiting, it actually has its benefits, chief among them being that choices no longer seem quite so black and white.

Where before you may have been asked if you’d prefer to say something as sickly sweet as “I’d love to donate everything I own to the darling orphans”, or something as dark as “I’m going to choke a puppy to death and then eat the remains”, your responses now seem a bit more grounded. As a result, rather than thinking about whether you want to be Mother Teresa or Satan incarnate, you begin to think more like a 3 dimensional person. You’ll be asked to make more complex moral or strategic decisions and while that may not be as fun, it actually offers a deeper experience. 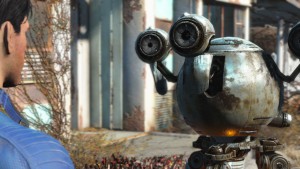 Similarly, in place of the old didactic karma system is a new companion mechanic. Companions are nothing new to
the Fallout series, however they definitely take more of a centre stage here. As opposed to feeling like mindless NPCs, only their to help out in a combat capacity, they are now more like characters. You’ll chat with them, bond with them, possibly romance them, or most likely piss them off to the point where they want nothing more to do with you. It’s their responses to your actions that form the new morality system, as certain characters approve of certain things. It’s very similar to how it works in Dragon Age.

In short, Fallout 4 is a game with such an extensive amount of content, that one review will never be able to encapsulate the entirety of its scope. There’s the exhaustive perk list, the unimaginable weapon variety, the sharp writing and the wonderful retro-futuristic style. Even the weather impacts gameplay! Yet despite this wealth of content, quality is never sacrificed for the sake of quantity and it is perhaps in this respect, that Fallout 4 stands out the most.

Fallout 4 is available now on Xbox One, PS4 and PC.