Read more
You are at:Home»Culture»The Great Star Wars Comics that are Soon to be Forgotten
By Chris Evans on December 3, 2015 Culture, Literature

Star Wars is prized by many of its fans because of its visually rich storytelling, so it seems like a no-brainer that this galaxy far far away would translate incredibly well onto the pages of comics. Dark Horse have contributed numerous memorable characters and adventures to the Star Wars lore, during their stint as the sole publishers of Star Wars comics from 1991, up until Disney’s acquisition of the franchise.

The arrival of JJ. Abrams’ The Force Awakens marks the beginning of a new chapter in the Star Wars universe. To allow their writers complete creative freedom with their new sequels, Disney have sent the entire expanded universe canon down the Sarlaac pit, never to return. It seems fitting then, to revisit some of the best Dark Horse Comics, before they’re forgotten in the wake of Episode VII. 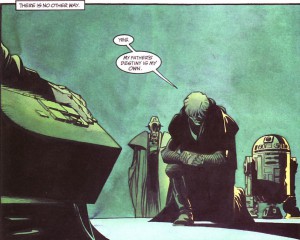 Shortly after acquiring their licence to the Star wars universe, Dark Horse launched an ambitious series of comics to pick up the story of Luke and co. post Return of The Jedi. The Dark Empire trilogy is a worthy successor to the original films in terms of its scope, and we get to see what would have happened if Luke had succumbed to the dark side.

It’s pretty disturbing at times; the Emperor, who has resurrected himself as a clone, threatens to use his powers to possess Leia and Han’s unborn child. If Lucas had ever needed to roll out a mature rated Star Wars film, Dark Empire would be the source material he would be reaching for.

This origin story of sorts gives us a closer look at the mysterious Sith Lord, as Darth Sidious tests him with his first mission. It’s a relentlessly paced plot, with Maul infiltrating and taking down an intergalactic crime syndicate from the inside. For anyone that felt Maul’s appearance in the Phantom Menace was all to fleeting, this is a must read.

Splinter of The Mind’s Eye

Right from the start, George Lucas had grand plans to spin Star Wars out into a saga, whether we liked it or not. 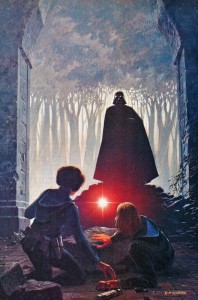 Thrifty, Lucas had already lined up a low budget sequel called Splinter of The Mind’s Eye, in case his first film met with a mediocre reception. Penned by Alan Dean Foster, the story sees Luke and Leia investigate the swamp world of Mimbaan, searching for a crystal that can harness and focus the user’s force powers.

Foster’s novelisation was released as the first official Star Wars tie-in, giving birth to the expanded universe in the process. Drawing on Foster’s descriptions and Ralph MacQuarrie’s original cover art, Dark Horse’s four-part comic adaptation vividly brings the story to life, giving us a glimpse of how a very different sequel to Star Wars could have looked on-screen.

Part of the reason Darth Vader is so terrifying is down to the knowledge imparted by Obi-Wan, that the Sith Lord mercilessly hunted down and killed the last of the Jedi. At the end of Episode III, Lucas undid this mythos somewhat, by showing that the clone troopers seemingly did most of the work, whilst Anakin merely chopped down some younglings.

Purge seeks to correct Vader’s legacy, by depicting his obsessive quest to hunt down the cunning survivors of Order 66. Picking up just where Episode III left off, these comics are full of betrayal and desperate confrontations and do a lot to restore Vader’s badass status.