Read more
You are at:Home»Culture»Review: Master of None (Season 1)
By Laurence Russell on November 25, 2015 Culture, Television
80%
80
Astonishing

If you enjoy comfortably paced, lightly humorous drama with a strong set of social themes to explore, then perhaps Master of None is for you.

Life is filled with choices. Some people feel that nothing matters and the simple joys of life are all that’s important. Other people think life is defined with success and structure. Whatever the case, happily-ever-after is a deceptive and elusive idea, and for all the walks of life you come across that you may choose to follow, you will be master of precisely none of them.

As the name suggests, Master of None is an eclectic and unconventional show, featuring a diverse mix of genres that is sometimes juggled well and other times leaves the viewer confused as to 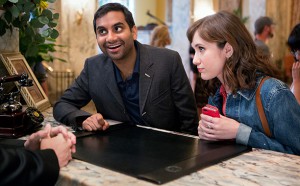 what the creators of the show had in mind in the first place.

The show follows Dev Shah (Aziz Ansari), an actor who isn’t too serious about his career and is having thoughts about whether he feels fulfilled enough to settle down. He’s joined by guest star comedians like Noël Wells (SNL) Eric Wareheim (Tim and Eric) and H. Jon Benjamin (Archer) who seem peculiarly underutilized, as does Aziz himself.

The show covers topics such as micro aggression racism in the media industry, life as a 1st generation child with immigrant parents, feminism and the minutiae of dating etiquette, amongst other things. In fact, every episode seems to be about an entirely different subject, each with a strangely different tone. 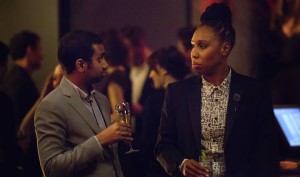 , before they wander around New York or attend social events, culminating in some kind of moral about millennial lifestyle. Certain plot threads seem to be intended to be humorous, as with Dev’s experience hooking up with a woman who is cheating on her husband, which is solely motivated by Dev getting cut in line by said husband. But even then, the situation just resolves itself normally without a punchline. Sometimes the conclusion of an episode just feels artless and strange in an unforeseen anti-climax.

But to summarise the show as awkward and poorly thought out doesn’t do it credit. Master of None definitely has a rare charm that borders between pleasantly paced realism and subtle comedy, especially when Arnold (Wareheim) is around. The show breaches social topics most shows wouldn’t consider covering, and it does so very earnestly. You understand Dev’s concerns about the pressures of getting married when he isn’t sure about anything in his life. You equally understand Rachel’s (Wells) frustration with Dev for passing off her viewpoint as conjecture. Despite its weirdness, and its poor acting, Master of None strikes a very different chord to anything else like it.

The show is a fever dream that will explain in detail the manner in which women are undermined in tiny, seemingly unimportant ways, before going on to display Die Another Day’s (2002) 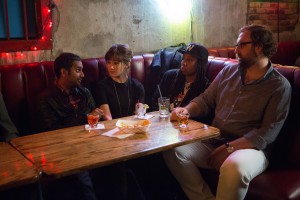 Colin Salmon, who unlike the other characters plays himself, set up an elaborate domino run for Dev to knock over. Which is not only unexplained, but is also the actor’s final appearance in the show. Whilst Master of None’s 30 minute runtime might drag like an hour with how little happens per episode, and in the entire series for that matter, it paces along comfortably with no explosive melodrama. The show has already received calls for a second season from fans, although Netflix has yet to respond to the hype.

Season 1 of Master of None (2015) is available to stream in its entirety on Netflix.