Read more
You are at:Home»Culture»Review: Jessica Jones (Season 1, Episode 7)
By Matt Clarson on November 24, 2015 Culture, Television
60%
60
Getting there

Jessica Jones is an excellently made show, but its narrative is a bit wandering in the first third of the season. Stick with it, though, it picks up towards the middle.

After a terrific opening episode, Marvel’s Jessica Jones threatened to run out of steam, doing things simultaneously too fast and too slow. It was hard to see where the show was going after four or five episodes, and not in a ‘ooh, it’s mysterious and complex’ way, but more ‘wondering how they could possibly stretch this out for another ten(ish) episodes’ sense. By the mid-way point however, things are starting to look much more promising. It seems like we’ve finally gotten round to the main section of the story, things are starting to happen, and the characters are all growing nicely.

The show is, and has been throughout, a well-done affair. It’s wonderfully shot, the acting is great (my god is David Tennant just spectacular), and, besides a few hammy lines, the dialogue is well-written, combining wit with cool in the right proportions, just like the best Marvel has to offer. Tennant remains the best part of the show, dancing around the periphery with a brilliantly casual malice, and when he finally takes centre stage at the end of episode seven it’s gruesome and frightening – you can almost feel the show step up a level whenever Tennant is on screen, and hopefully now that can be maintained for the latter half of the season. 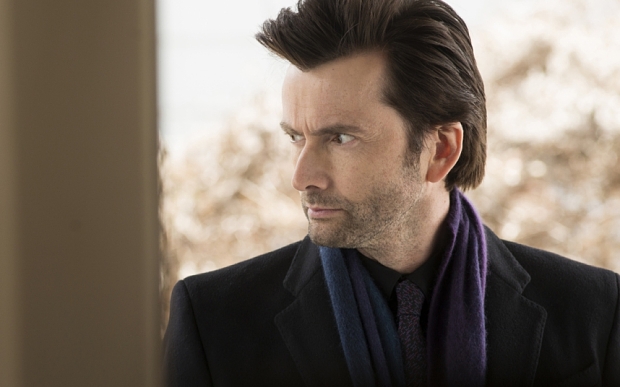 Krysten Ritter, as the eponymous protagonist, is almost as good as Tennant (which is not to say she’s bad in any way, her performance is excellent), her anxiety and self-doubt being the central parts of a character that is entirely unlike any other hero in the Marvel Cinematic Universe. Despite having super-powers (strength and flying – or, rather, “guided falling”), she remains shockingly vulnerable throughout the series, due to the particular brand of nasty that is Kilgrave (Tennant). The two of them together push the show further away from what we’d expect from a Marvel property, there’s no bright lights and triumphant horn section, this is a gritty, psychological thriller, almost horrific in places.

The show’s production, lead by creator Melissa Rosenberg (Dexter), goes a long way towards building the claustrophobic atmosphere in which Ritter and Tennant do battle. A masterful use of colour that eschews the dark, washed-out look used elsewhere in the genre in favour of, you know, letting the audience actually see what’s happening all the time, combined with a jazzy score similar to those in House of Cards and Homeland, makes for refreshing take on the noir-ish, gritty character drama. And the use of the colour purple and freaky as shit music whenever Kilgrave is lurking nearby is genius.

Jessica Jones is let down by two things, though. The first, which was touched upon above, is that the story has a frustrating aimlessness to it in the first third of the season, though it’s worth stressing that by episode six things start gathering together and forming what will hopefully become a cohesive, gripping plot. The second is that it follows in the wake of Daredevil, which set the bar ridiculously high for the Marvel/Netflix shows. Daredevil’s plot moved forward with a compelling, unwavering sense of direction, everything building all the time to one crescendo, and it absolutely nailed the one crucial aspect of production that hasn’t been mentioned yet – action. The action in Daredevil was phenomenal, and after that, the kind of lazy, made-for-TV standard met by Jessica Jones is woefully lacking. That doesn’t mean Jessica Jones needs the same highly choreographed fight scenes as its predecessor, nor does it need to be exactly at the same level, but compared to Daredevil, or compared even to the kind of high quality and attention to detail in every other aspect of the show, Jessica Jones’ action is inexcusably dull.

Still, all in all Jessica Jones is a very, very good show. Presenting a much greater risk than Daredevil, it has certainly achieved enough to warrant it existing in the first place, and based on the direction it has at last begun to take, the season’s second half looks set to be just as fantastic as Daredevil.

Season 1 of Jessica Jones (2015) is available to stream in its entirety on Netflix.