The refreshing reboot the franchise desperately needed. Guitar Hero Live's two modes are at times awkward and under developed but always impressive, addictive and packed with content.

Twelve Guitar Hero games were released for console between November 2005 and September 2010. With at least two titles being released every year, alongside the Rock Band games, it was no surprise that fans started to get bored and sales began to decline. It wasn’t that the quality was decreasing, it was because the games barely changed bar new songs being added. Five years later and Activision felt it was time to bring the series back, albeit with some big changes. 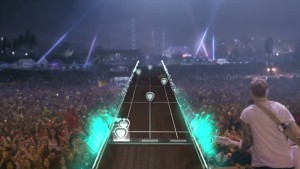 The biggest and most obvious of those changes is the guitar controller. Gone are the five coloured buttons, being replaced by two rows of buttons, three white and three black. This means there is no more straining your little finger to reach the orange button on higher difficulties, but that does not mean it’s any easier. With one extra button there can be more combinations, meaning your hand moves more regularly, just not as far as with the old setup. The new design also makes the guitar playing experience slightly more authentic. However, by far the biggest advantage of the new guitar is that it offers something new to series. Experts of the old games have a new set up to learn and have to start at a similar place to gamers who have never played a Guitar Hero game – something that Rock Band 4 does not offer. Unfortunately, with the buttons now integrated into the fret board, only being separated by small pieces of metal, they occasionally squeak or catch the side of the controller, interrupting the flow of the gameplay, but it is rarely a problem.

The other significant change is the two new game modes, Guitar Hero Live and Guitar Hero TV. ‘Live’ is the traditional campaign mode that sees you joining bands to play small sets. A lot of the content from the previous titles is missing though – there is no personalisation or customization for your band, there isn’t any progression, it’s a very straightforward mode. The sole focus is the ‘live’ aspect which sees you dropped into an existing but unknown band as the lead guitarist at one of two fictional music festivals. However, what is impressive is the live action performance that have been recorded to replace the animated settings of the older games. It can be quite gimmicky with the awkward crowd and band reactions that change with how well you perform but the attention to detail is amazing. The stages are packed with people and props, the crowds are huge, the band perform the songs perfectly and the moments when the crowd sing along make the atmosphere much more like a real life festival. It is an incredible technical achievement that differentiates Guitar Hero Live from the older games – it’s the change fans wanted.

It certainly not perfect though. Most of the time you won’t even notice the ‘live’ background because you’re so focused on the gameplay. On the higher difficulty levels I was concentrating so hard that I often finished the song without even noticing which band I was playing with, let alone how the crowd was reacting. However, that can be a good thing because when you look closer at the crowd, the faults become more obvious. The first thing that stands out is the signs held up by the crowd – not much thought went into them, that’s for sure. They say things like ‘ahhhhh’ or ‘yeeeaahh’ and never anything to do with the song or band (real or in-game) that you’re playing. The reactions of your fellow band members can be equally as cringe-worthy as they shout and wave at you whether you are doing well or not. Miss a couple of notes and everyone will be staring at you; a couple of seconds later and you’ll be the best guitarist of all time – the change in tone can be quite jarring. 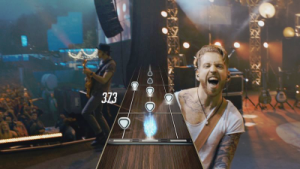 The track list in ‘live’ could be better as well. Predominantly made up of pop songs or indie rock, it has clearly been designed for the casual player, with better songs (in the sense of being more guitar-centric) such as The Rolling Stones’ ‘Paint it Black’ appearing towards the end of the mode. Songs such as ‘Berserk’ by Eminem, or ‘Bangarang’ by Skrillex are not what you would usually expect from a game centred around playing the guitar, but that isn’t to say they’re not fun, it’s just not always obvious what instrument you’re supposed to be imitating. Also, some of the songs you would expect to be in a 2015 guitar hero game, such as ‘Demons’ by Imagine Dragons, are some of the most boring to play, especially on the lower difficulties. Of course, which song is used from which band is dictated by copyright but wouldn’t it have been better to go for something completely different.

‘Guitar Hero TV’, or GHTV for short, is the main attraction for seasoned players but as with ‘live’ it has its own issues. The overall track list of the game is boosted by over 200 playable songs that swap the ‘live’ setting for each track’s official music video. Developer FreeStyle Games have created their own version of a music channel, complete with adverts for other tracks, with two separate streams that play pre-designed sets of songs in certain genres, changing every 30 minutes. As you play you earn XP to level up and coins to spend on guitar upgrades and play tokens. Play tokens give you the chance to play any of the songs in GHTV one time, whenever you like. You start with 10 tokens and can earn more by levelling up, spending coins, or with real money. The phrase micro transaction is not something people want to hear in the world of gaming nowadays, especially when a game costs 70 pounds in the first place, but beyond the frustration of them being included at all, they are never much of a problem in Guitar Hero Live. Over my first few hours of playing I was rewarded with so many play tokens that running out never became an issue, and when I eventually do so, I have more than enough in game currency to buy more. Realistically, without this additional source of income the developer would be unlikely to continue updating the track list as they have been doing since the game’s release. When you compare Rock band 4 that has 65 playable songs with Guitar Hero Live that has nearly 300 you cannot really complain about some optional micro transactions.

From Rage Against the Machine to Hillary Duff, there is something for everyone in GHTV’s track list. The heavier rock songs that are missing from the ‘live’ section return but they are not always the most enjoyable to play. Guitar Hero and The Vamps’ ‘Somebody to You’ is not an obvious pairing but the Demi Lovato supported track is one of the better tracks to play along to. Whatever music you are in to, there will something here that interests you.

The multiplayer options are disappointingly basic, with no option to add a bass guitar, a rhythm guitar or any battle options. Its clear that FreeStyle wanted to move the series away from the party game genre but they should have put more thought into the multiplayer option they have included.

In short, Guitar Hero Live is the refreshing reboot the franchise desperately needed. Compared to its rivals, Live offers so much new content and better value for money. We can only hope that FreeStyle Games continues to develop the series into the future.