Read more
You are at:Home»Culture»Review: Hairspray at The Mayflower Theatre
By Georgia Simpson on November 19, 2015 Culture, Theatre
80%
80
energetic

The lively production has a lot of kick and swing in it's happy and enthused numbers all while combatting social and racial injustices!

For one week Mark Goucher and Gale King productions present a brand new production of the musical-comedy Hairspray at Southampton’s Mayflower Theatre. The production stars Harry Potter and the Order of the Phoenix’s Tony Maudsley and 60 Minute Makeover’s Claire Duncan as Edna Turnblad and Velma Von Tussle respectively.

Hairspray is based on the 1988 John Waters film Hairspray, but passion and life for the long-forgotten production was reignited after the 2007 film re-make starring John Travolta and Zac Efron.

Set in Baltimore, Maryland in 1962, overweight teen Tracy Turnblad (Freya Sutton) dreams of dancing on the hit local dance television show, The Corny Collins Show. After failing to pass the auditions due to prejudices on her weight and acceptance of racial integration, Tracy wins her place on the show by dancing for Corny at the high school dance. Overnight, Tracy become a star, yet this is not enough for her as she wants to dance with her African-American friends. Tracy believes the path to change in America is through the use of her fame to integrate the TV show, much to the disdain of TV station manager Velma Von Tussle.

Hairspray is arguably more than just a all-singing, all-dancing comedy musical, it is also a social commentary on the injustice and inequality present in America through the 1960s. This is highlighted in Goucher’s production with images of race riots, reports of the Cuban missile crisis, and Martin Luther King himself projected onto screens around the theatre. However, the use of these screens, detach audiences from what is actually happening on stage as they are an distraction from the dancers and actors. They are also not of use in the social context as obviously there were no huge flat screen TVs during the 1960s, so it keeps the audience at a distance as it does not allow us to completely indulge into the 1960s mindset with reminders of future technology embedded into the production. 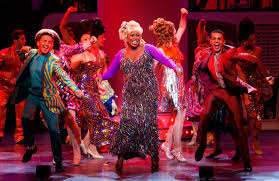 The one image that sticks in the mind was of MLK at the end of Motormouth Maybelle’s big number before the finale of the show.  And what a number it is. ‘I Know Where I’ve Been’ is a huge song, filled with impossible riffs and high notes with lyrics that profoundly speak to the heart of equality and the drive of those who protested in the 1960s. X Factor contestant turned West End star, Brenda Edwards blew the roof off the Mayflower Theatre when she belted-out those notes. She captivated the audiences attention for the full three minutes with the focus directly on her, no-one was paying attention to the surrounding cast or sets during this poignant moment. By the final high-note of the song, I had goosebumps with the whole audience cheering her on, many giving a deserved standing ovation.

However, it is Tony Maudsley who is the real scene-steeler of the production. Taking on the role of Mrs. Edna Turnblad, Maudsley is the comic relief to the racial backdrop. Through not given much stage time, Maudsley steals every scene he is in with quips, background acting, and general hilarity. The standout moment is of course, the ‘Timeless to me’ duet with husband Wilbur Turnbald (Peter Duncan). Through neither are particularly impressive singers, they pack a punch in their hilarious number with comedic falls, boob grabbing, and with Maudsley slipping out of character by dropping his tone to that of man’s again to threaten Wilbur. Comedy gold.

The final energetic performance sums up the overall experience of the production. It was fun, it had laugh out loud moments, and it is truly colourful. In front of a sold out crowd this musical couldn’t really do much wrong, the only thing letting it down is its lack of production values but what can you expect from a national tour? To conclude, the production is fantastic with a superb cast with stand out performances, that make audiences want to dance right alongside them.

Hairspray is at The Mayflower Theatre till 21st November 2015. You can find more info about the show here.