Doctor Who returns with an excellent start to the new series

I am, have always been, and always will be, a big Doctor Who fan. It takes me back to being 9 years old, huddled on the sofa, excitedly waiting for David Tennant’s enigmatic and charming Time Lord to explode (usually quite literally) onto my TV screen. But recent series have left me, like many other fans, feeling drained. After two seasons that have ‘flopped’ in terms of storytelling, I was not expecting great things when the ninth series began last month.

However, I was at once pleasantly surprised. Steven Moffat, you charmer; treating us to both the fabulously wicked Missy (Michelle Gomez, oh what an asset to the show you are) and the surprise return of one of Doctor Who’s oldest and most complicated villains, Davros (Julian Bleach), all in the opening double-parter! Peter Capaldi shone as the Doctor as well. After a frustrating series of un-maximised potential from a brilliant actor, the twelfth doctor has finally found his groove in the role. But the most pleasant surprise of all came from, and I never thought I’d say this, Clara Oswald.

In recent series, Clara (Jenna Coleman) has become a somewhat stale companion; she lacks a niche to her character, something which has enabled previous companions to shine (earthiness – Rose Tyler; gobbiness – Donna Noble; sassiness – Amy Pond). But, surprisingly, Moffat had an ingenious solution. With Coleman’s departure announced before the series had even begun, the narrative has pushed Clara further in the same direction; but made the Doctor’s reliance on her Clara’s own ‘Achilles heel’.

In her head, Clara is becoming the Doctor, and that’s never a gonna end well. Over this first half of the series, more and more parallels between Time Lord and companion are becoming evident; in particular, they both have nothing left to lose, with Clara still motivated in her grief for poor old Danny Pink. Clara is becoming reckless, but unlike the Doctor, she won’t live forever, and the viewer is left with the feeling that there is a ticking time bomb counting down to an explosive exit.

Another massive success of this series has been the return of the two-parter. After nearly three series with just stand alone episodes, the Series 8 finale ‘Dark Water’/’Death in Heaven’ heralded a change for episode format. Seeing the success of these episodes, Moffat has formatted almost the entire of the ninth series into pairs of linked episodes. This allows time for a nuanced plot, development of guest characters, and a good-old cliffhanger. 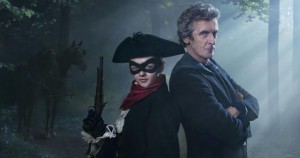 So we’ve seen a Missy/Davros combo at the start of the series. Then we got a classic ‘base under siege’ story with some clever time trickery; followed by the arrival of the enigmatic Maisie Williams as ‘The Woman Who Lived’; and now a revisiting of ‘The Day of the Doctors’ Zygon invasion one year on, with reflections to current tensions in the Middle East symbolised in the story. All of which were strong episodes. It’s definitely a move in the right direction for Doctor Who, with the remaining 4 episodes showing great promise. Could a return to Gallifrey be on the cards?