Read more
You are at:Home»Culture»Review: Tales From the Borderlands
By Thomas Davies on November 4, 2015 Culture, Video Games
100%
100
Insanely good

Enjoying games by Telltale has always been somewhat of a struggle for me. Their initial games, such as Sam and Max, Tales from Monkey Island and Strong Bad’s Cool Game For Attractive People, had humour, and charm, but their gameplay was dull and riddled with adventure game logic. Then, their later games (The Walking Dead, The Wolf Among Us) took their gameplay somewhere new, turning them into interactive pieces that still stood as games, but kept the story flowing, and didn’t have long gaps where the player didn’t know what they were doing. The only problem was that these games lacked the character and the flair that Telltale’s earlier releases had.

Set on the now-iconic world of Pandora, Tales From the Borderlands places you in the shoes of Rhys, a Hyperion executive and Handsome Jack fanboy, and Fiona, a con artist and bandit impersonator, and sticks you with a cast of colourful and inventive characters (both already established characters, and new original characters) and sends you on an adventure to track down something called a Gortys Project, in order to open the fabled Vault of the Traveller.

I was initially quite skeptical when I started the series. Borderlands was always fun, hilarious, and characteristic, there’s no denying that, but I wasn’t quite sure that the series could lend itself to a story that felt good enough to carry an adventure game. I was wrong.  Telltale Games’ writers put some serious time and effort into expanding on the franchise’s lore, its characters, its monsters, and its beasts, and they used all of these elements to create one of the most engaging stories in gaming at the moment.

The gameplay is your standard Telltale Games fare, and if I did have one complaint, it’s that after three years, you’d have thought that Telltale would have added something new to their dynamic. That being said, I was delighted to find at the end of this series that, unlike most other games made in this vein, the choices I’d been making actually did matter. I’m serious. Without wishing to spoil anything, there’s a big decision you get to make in the middle of the final episode, and the options that are available to you in this decision, all depend on decision you’ve made throughout the series. 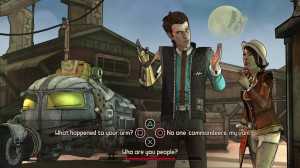 The series does have its weak points, the second episode came close to losing me, when the middle slows down considerably, but generally the episodes are set out incredibly well, with wonderfully fast-paced humour, strong action and an engaging story that constantly moves forward.

There are some graphics problems, texture crop-ins are incredibly obvious, and tend to throw you out of the moment. Similarly, in the last episode, there is a decision you can make that will affect certain scenes and there are similar pop-in errors there. On top of that, the game has a tendency to put up distracting loading screens, which can occasionally ruin a scene’s pacing, but really these are all small potatoes, and incredibly forgivable when you consider how much has been packed into these games, while Telltale were simultaneously working on their Game of Thrones series.

I guess my only real complaint is the ending. While I will admit that it does a fantastic job of either teasing another series of Tales From the Borderlands, or the recently announced Borderlands 3, it does feel a bit underwhelming, and it’s kind of annoying to realise that this means we have to wait for one of either of those two things, to find out what has happened to our protagonists. A wait which, for all we know, could take up to two or three years.

Though, with this in mind, it’s worth pointing out that the fact that I’m so disappointed with the ending (and only 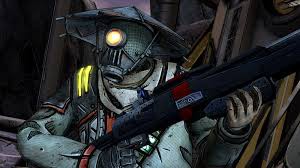 because the ending is a blatantly frustrating cliffhanger) is probably a testament to how much this game engaged me. It blends the new interesting mechanics and wonderfully complex storylines that Telltale have recently adopted, with their old charm and character which made their old games a lot of fun to play, in spite of their dodgy game mechanics. Ultimately, I would recommend this game to everyone. If you’re new to the Borderlands series, at least try out Borderlands 2 before go jumping into this game, as a fair bit of context is needed, especially to understand the relevance of Handsome Jack. Similarly, it might be worth reading up on the character of Athena, though Tales generally does a good job of covering her backstory.

What I can say about the game is this, Tales From the Borderlands is a fantastic, sci-fi, Mad Max-esque romp, with a strongly engaging story, immensely likable characters (Loader-Bot and Gortys basically steal the show), and the most fun implementation of Telltale Games quick-time based gameplay to date (utilising it in Thunderdome-esque races, robot fights, car chases, and at one point a fingergun fight). I would absolutely recommend this game to anybody who is a fan of Borderlands, though while I would recommend it to non-fans, I’d urge you play some of the first two games before hand!

Every episode of Tales from the Borderlands is available to download now on PC, iOS, Playstation 3, Playstation 4, Xbox 360 and Xbox One.