The tables have truly turned in this breath-takingly tense opening episode, promising what is sure to be the most intriguing season yet.

Above all else, the singular word to describe this opening episode of Jon Bokenkamp’s acclaimed crime thriller is tense. Getting straight into the aftermath of the season two finale, we are faced with a vast number of dramatic twists in the individual storylines of almost every character, as the third season of The Blacklist finally gets underway.

Chief among them is Special Agent Elizabeth Keen (Megan Boone), who after the events of the season 2 finale, suddenly finds herself in the middle of a media storm as the newest face on the FBI’s Most Wanted list. Alongside Reddington (James Spader), Liz is faced with a near-impossible task – to escape from the behemoth of national security: Washington DC. Whipped into a whirlwind getaway plan cunningly devised by Reddington, where the odds are point-blank 50/50, we see Liz at her most vulnerable. And as the episode progresses, we discover what that vulnerability brings out in her – for better and worse.

In another tantalisingly teasing moment (that runs out far too quickly) we are also placed in a room with Red and Liz, from which neither – as they are so prone to do – can walk away. Within this scene, we are offered an intimate glimpse at the relationship between these two characters, as they further hint at what certainly seems to be a connected past. Of course, with a show as tightly enveloped in secrets as this one, the clues we get are minimal and scarce – but after last season’s revelations about the undercover identity of Liz’s Mother, we are likely to hear a lot more about this aspect of our heroine’s ever-fragmented past and how deeply it impacts her sense of self. 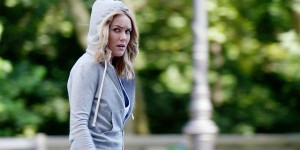 This season sees a change in Liz’s hair colour, among other far darker things… (Image via Entertainment Weekly)

The episode also tackles the struggles of Liz’s ex-partner, Ressler (Diego Klattenhoff), as he is forced to take over the taskforce and hunt her down. His personal reluctance to pursue Liz, as well as his fierce commitment to the job at hand, offers an interesting emotional paradox, as his close friendship with Liz both fuels and hinders his mission to get her into custody. Agent Narabi and tech specialist Aram are also seen to be struggling with the new power-shift. In addition to that, the taskforce’s former director, Harold Cooper (Harry Lennix) is confronted with the consequences of his actions from last season – forcing him into the dilemma of choosing what is right by Liz, (who is still innocent of most of the charges laid against her) and what is convenient for him as a man on the wrong side of the law.

And as if all that wasn’t enough for one 45-minute episode, we are also given a terrifyingly tense sub-plot in which Reddington’s loyal bodyguard, Dembe (Hisham Tawfiq) is targeted by one of the Cabal’s most menacing agents (played to terrific effect by Edi Gathegi).

Ultimately, as opening episodes go, this one is a belter – with enough action, emotional impact and even the odd bit of humour (courtesy of Spader’s deliciously coy portrayal of Reddington) to please audiences. It’s various plot-based segues into upcoming episodes are also undoubtedly enticing, leading us to believe that this season may just be the most enthralling yet.

The Blacklist airs on Fridays at 9pm on Sky Living.