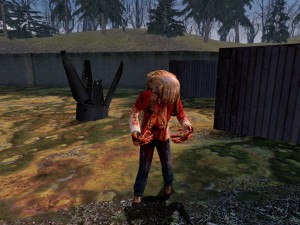 I wish I could say that I tried to avoid writing another entry on Half-Life, but as soon as the list asked for the ‘Scariest Video Game Villains’, I leapt at the chance to discuss possibly the most gut-wrenchingly scary villains of all: Headcrab Zombies. It’s true, zombies are dull now, and any piece of media that wants to bill itself as a horror these days, usually sticks zombies in and then walks away, satisfied with a job well done. But, what makes your generic everyday zombies scary, is not what
makes these bastards absolutely terrifying.
What really singles them out is the fact that, when you first set fire to one, they scream. And as you hear these screams, it slowly dawns on you that they are begging and pleading with you to help them. It is the fact that, underneath their mutilated exterior, there is still some humanity, and some awareness in them. And that is why they deserve an entry on this list. 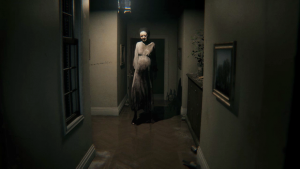 With Silent Hills officially dead and buried, the immaculate P.T. is all that we have left of the game that could have been. The ingenious premise was simple. There’s no combat. There’s no hiding. All you do is just walk around in a circle repeatedly. To be more precise, you take control of an unnamed protagonist and walk around the same apartment, each time discovering that something has changed. At first it’s little things, a door might open a crack, some new sounds might be heard. But as it goes on, things get exponentially creepier and that is all down to Lisa. A pregnant woman who was murdered by her husband, Lisa’s spirit shows up throughout P.T. at unexpected intervals to scare the crap out of the player. Her uncanny movements, permanent smile and missing eye may give her a horrific appearance, but it’s her unpredictable behavior that really unnerves you. You never know when she could be waiting right behind you, when she might be watching. The only warning you ever get is the radio’s instructions to ‘look behind you’ (a course of action I wouldn’t recommend) and her signature sobbing. The fact that these hysterical cries are indistinguishable from her insane fits of laughter is perhaps the scariest thing of all though. 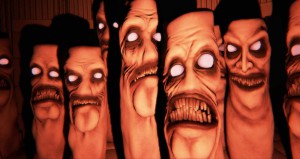 Ah, indie horror. Ever since the runaway success of Amnesia, indie developers worldwide have repeatedly failed to make lightning strike twice. Albino Lullaby is the first game in a long while to realise that injecting some ‘character’ into your antagonists can go a long way in generating horror. Implied to be brainwashed and mutilated humans that were dragged down into an underground city, the terrifying Grandchildren’s main distinguishing feature is that their motivation for catching you is actually clear. They want you to become like them. Ambiguity in horror villains is fine, but in the Grandchildren is such a detached, yet almost too human personality, wrapped inside a creepy, insidious bodice. The game has only come out recently, yet these monsters are already beginning to make a name for themselves, and could easily become iconic gaming villains in their own right, completely independent of the ‘scariest’ qualifier. 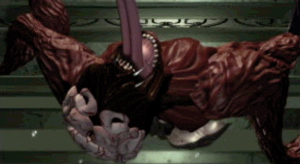 Another one from the Resident Evil series, this time in the form of monstrous Lickers. Making their first appearance in the second game, the Lickers are agile mutant creatures, who get their name from their tendency to use their elongated tongues to wound their prey. Evolved from the standard zombie, the Lickers are skinless and deformed monsters, responsible for some of the best scares in the long-running franchise. Their iconic introductory cut-scene alone will forever be imprinted onto the memories of fans. 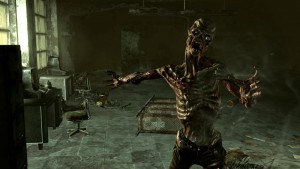 While roaming around the subways of Fallout 3’s Capital Wasteland, you are bound to come across the terrifying Feral Ghouls. Feral Ghouls were once people, but after prolonged and intense exposure to huge amounts of radiation, they have had their skin rot away from their bodies have produced a ‘decayed corpse’ like appearance. Unlike there Ghoul counterparts, Feral Ghouls have lost all humanity and will attack anything that is not like them.

One of the scariest things about feral ghouls is that, nine times out of ten, you will hear them before you see them. Their heavy panting as they frantically scuttle about one of the game’s many metro stations will alert you to their unfortunate presence. Once they detect you, Feral Ghouls will let out a gut-wrenching screech before sprinting to your location. Arms flailing as they run, they will proceed to viciously beat you with their deformed rotting fists.

Although they are not the toughest enemies in the game, Feral Ghouls often roam around in packs, which not only means they are more deadly, but also makes them that much more formidable. 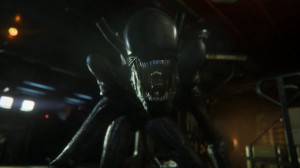 Alien: Isolation is a game that raises the bar in terms of movie to video-game adaptations, in terms of AI, and in terms of villainy. Isolation remains faithful to the design of Ridley Scott’s original 1979 feature. The 70s envisioned space station looks suitably bleak in retrospect, appearing as a relic in decay. One thing remains untarnished though; the menace of the Xenomorph.

An exceptional example of AI intelligence, the alien learns from the players’ attempted resistance. Flamethrowers and shotguns might prove an effective deterrent at first, but labour these and the Xenomorph will soon pay them little mind, rushing forth to spear and devour poor Amanda Ripley (that’s you). Further to this, it learns from your cowardly avoidance tactics. Hiding in lockers works initially, but soon it will adapt to smash through the door and tear you to shreds.

Scary enough? Perhaps not. But the Xenomorph represents a constant threat. Discharging weapons, running, or implementing environmental changes will invariably see the fatal foe charge through doors and ventilation ducts. Its screeches and thundering footsteps combine with the increasing tempo of the game’s soundtrack, to indicate that the end is nigh. The alien’s presence thus requires genuine guile and foresight. Indeed, opportunities to save your game progress are sparse and death therefore becomes a genuinely galling prospect.

The Xenomorph forces players to summon their resolve. In a time when passive gaming has become the norm, that’s a terrifying prospect.