Read more
You are at:Home»Culture»Review: Sweeney Todd at The Mayflower Theatre
By Brendan Westhoff on October 24, 2015 Culture, Theatre
60%
60
Disappointing

Arguably Steven Sondheims greatest work, Sweeney Todd is a tale of bloody revenge, that has shocked, yet gruesomely delighted audiences across the world since 1979.

In recent years, a huge West End production saw Michael Ball and Imelda Staunton take on the leading characters to rave reviews. Conversely, earlier this year, a nightly audience of 70 squeezed into a production held in an actual functioning pie shop, complete with pie and mash, with a similar resounding success. With an expectation to be wowed; this production unfortunately disappoints on many levels.

As a co-production between Welsh National Opera, Wales Millennium Centre, and West Yorkshire in assosciation with Royal Exchange Theatre, this may have caused a case of ‘too many cooks spoiling the broth’, or in this case, pies.

Traditionally set in the 19th century, this new production is set in the 1970s, with some characters wearing tracksuits, Senior Pirelli’s mobile barber stall is a Reliant Robin car and Mrs Lovett looks like Barbara Winsdor as the Eastenders landlady. Whilst a contemporary adaptation is not necessarily a bad idea, key aspects of story don’t make sense in modern day context. Some script changes may have been necessary to execute this, such as the concept of Johanna being Judge Turpins ‘ward’ and the fact that Sweeney discussed removing teeth; I believe dentists have been around for a while? 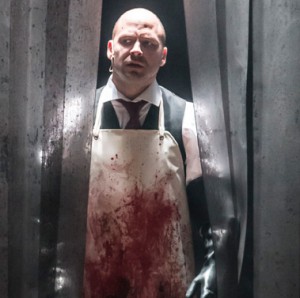 Whilst vocals were near faultless, David Arnsperger as the titular character lacked the charisma, anguish, and blood-thirsty sense of revenge that underpins the entire story. A pivotal plot moment, when Sweeney realises his latest victim is in fact his estranged wife, Arnsperger spoke the words “Oh no”, devoid of any emotion and in a way which was almost comedic.

More appropriate laughs are found elsewhere as the production is packed with black humour. More often than not, this came from Janis Kelly as Mrs Lovett, upstaging her male counterpart with sharp comic timing. Despite this neither of the lead actors demonstrated a stage presence that commanded the audience’s attention.

The huge WNO chorus sometimes looked out of place, but despite this rang out, capturing the ominous and chilling tone that surrounds the story. The supporting cast were generally good, however, Welsh tenor Aled Hall as Beadle Bamford frequently slipped carelessly from cockney to his native accent.

If Sweeney Todd isn’t to your taste, then WNO’s MADNESS autumn season features two other productions; Bellini’s I puritani and Handel’s Orlando.

The three productions tour the country until the end of November. Visit the WNO website for more details.