Like Fight Club with hackers, Mr. Robot is one of the best shows on air right now. Watch it. Watch it now.

Mr. Robot is probably the best show to air this year (it’s always possible that something will come out in the next couple of months that is better, but I doubt it). Its first season is of the kind of quality that has been brought to TV by landmark shows like The Wire, Lost, Breaking Bad, and Game of Thrones, and if it can maintain the same level of excellence over a few more seasons, it will be more than worthy of a place among the best television has to offer.

The show, created by Sam Esmail, is at its heart a love-letter to Fight Club, taking the dark style, in-your-face anti-establishmentarianism, and mind-bending approach to perception to a present that, sixteen years later, looks much the same as it did when Fincher’s film was released. Mr. Robot tells the story of Elliot (Rami Malek), a young hacker who is recruited by a group of anarchist cyber-criminals led by the eponymous Mr. Robot (Christian Slater). Elliot and Mr. Robot spend the next ten scintillating hours of television conceiving and enacting a plan to take down one of the world’s largest corporations and erase the world’s debt. All of this happens alongside Elliot struggling with several personal afflictions: a morphine addiction, social anxiety and clinical depression, as well as severe paranoid delusions. 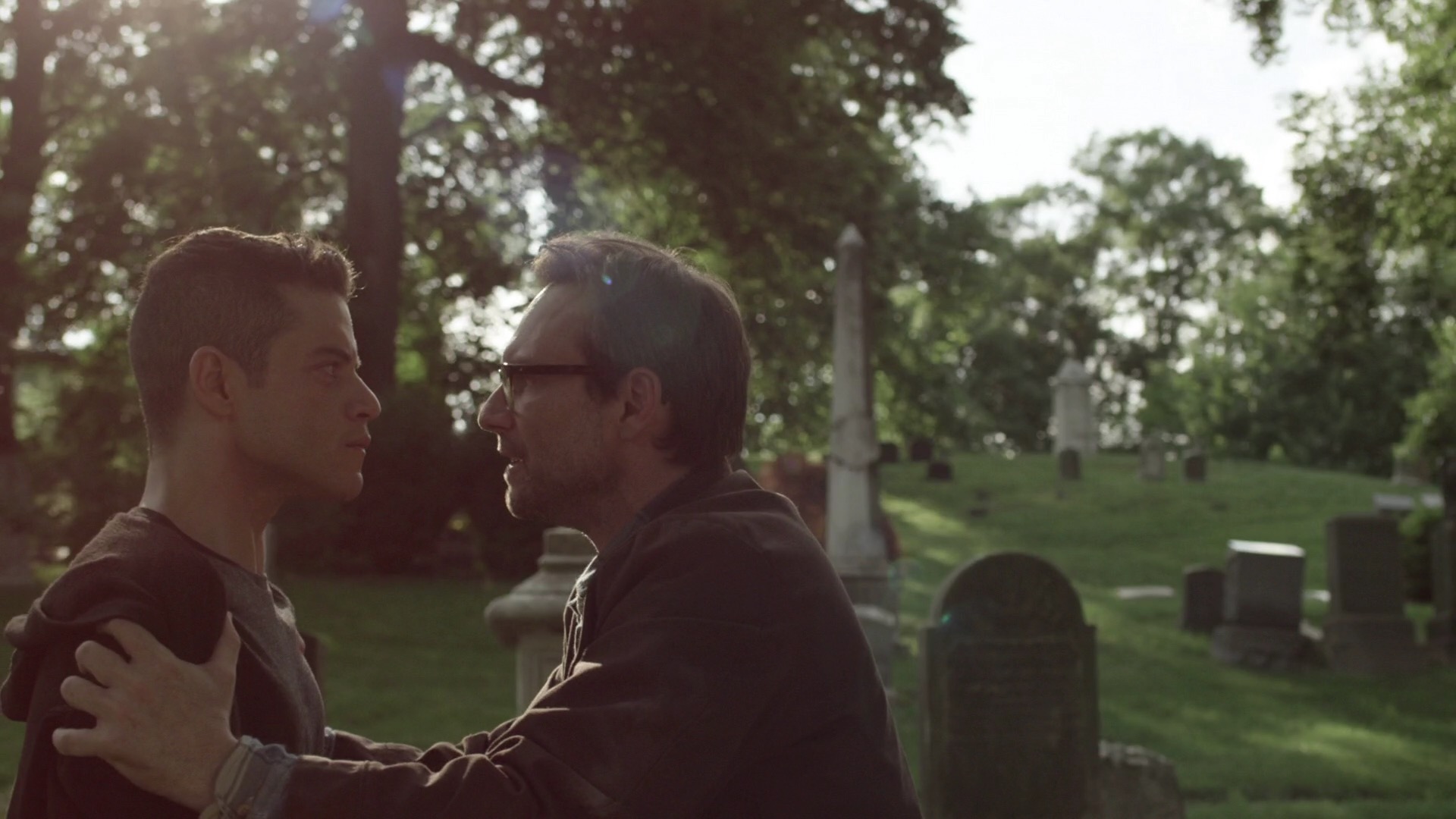 From the start, Esmail does away with the fourth wall, having Elliot repeatedly talk directly to the audience, drawing us into his tumultuous mind – in one phenomenal episode we follow Elliot through a series of hallucinations that leave us as debilitated as he is – and as the story unfolds it becomes clear that Elliot is the most unreliable of narrators. The show makes you guess at what will happen next, and while the answers may be obvious, it twists and winds around you, making you second guess what you think you know.

Alongside Elliot and Mr. Robot, shooting off from the main plot, the show follows several supporting characters who are as equally well-drawn as its protagonist. From Elliot’s childhood friend (played by Portia Doubleday), a good-natured woman ground down by the machine of corporate America, to Tyrell Wellick (Martin Wallström), a wonderfully evil executive and his wife (played by Stephanie Corneliussen), the most frightening pregnant woman you’ll ever encounter. With a host of characters and sub-plots that are as compelling as the story proper, Esmail weaves a complex cluster of narratives into a cohesive whole as the season concludes in a climax of revelation, of shock, and of a sense of awe at the scope of the thing.

Though pretty much everything about the show is superb, there are two things which raise it into the highest echelons of television: the ambition of Sam Esmail, and the glorious and sustained performance from Rami Malek.

When talking of Esmail’s ambition with the show, the writing and narrative discussed above are not included – there are numerous shows with writing that is as good as and better than that found in Mr. Robot, at least in terms of scope. Instead, the ambition of the show can be found in the way it is made. For one thing, it refuses to coddle its audience. Exposition is reduced to a minimum, and technical jargon is thrown around without thought (the extreme technical accuracy of the show has been discussed at length all over the internet, and as cool as it is, it isn’t really what makes the show great). The show rushes through moments that require actual, deliberate attention from the audience, but does so without ever quite losing them. It’s like if Christopher Nolan were to make a film without having to care about the common denominator (see: Memento).

As well as this fast-paced, unapologetic intelligence, Esmail brings a quality of production to the show that is rarely found in television. It is more beautifully shot than many films, the episodes are skilfully directed (including some of the best cold-openings to episodes in any show ever), and the use of music in the show is wonderful – setting the perfect tone for any given moment without ever being too obvious or ham-fisted (see: Scrubs). Esmail’s ambition for his show makes watching it like watching a film rather than a TV series; a very long, very addictive, very compelling film. 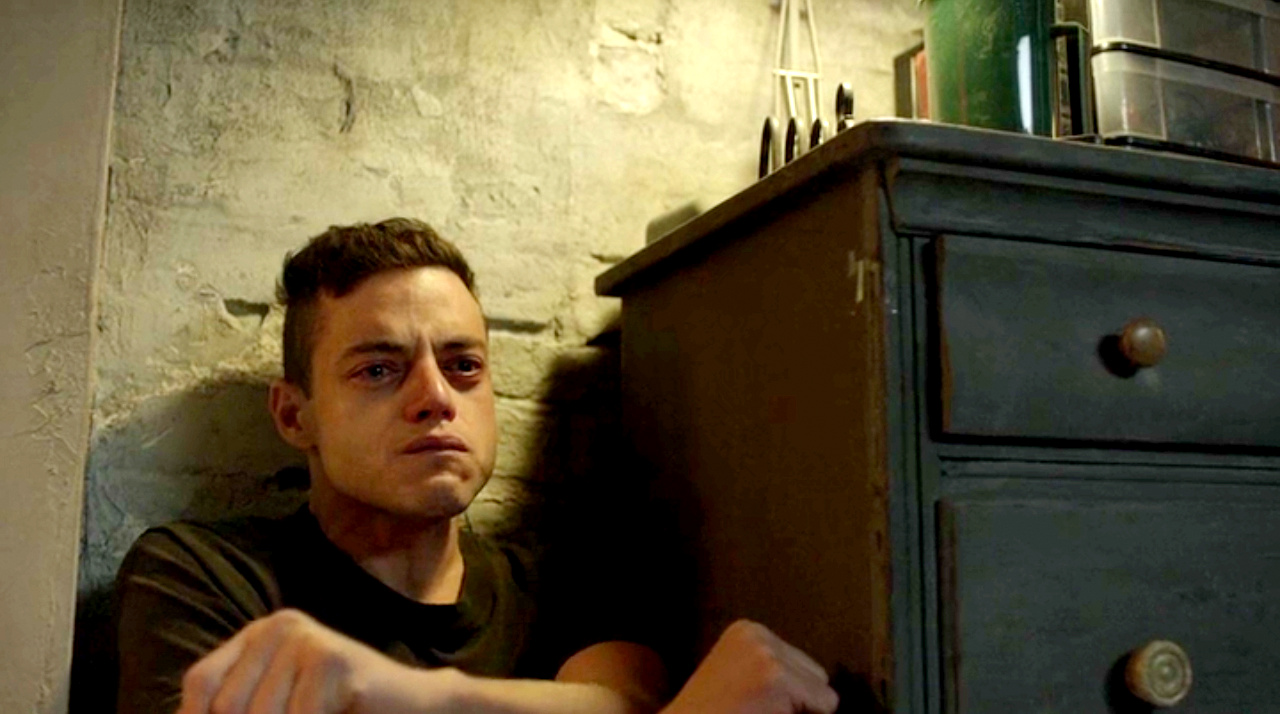 If I told you Mr. Robot was fun, would you believe me? Photograph: USA Network

And as for Rami Malek: his performance throughout the first season is just breath-taking. At the centre of the show, and in constant communication with the audience, he offers a grounding point in the often bewildering narrative (but bewildering in a good way, as opposed to being like The Room). Sympathetic and nuanced, from the off Malek makes Elliot feel like a real person confiding in us than a character. He goes from a heart-aching, touching moment of tenderness to a sickening, horrifying look at how you can devastate a man without lifting a finger. Watching him navigate Esmail’s beautiful world, always on the edge of losing control, teetering constantly towards falling into insanity and despair is captivating – and in what is probably the best moment of the show, he delivers an astounding portrayal of loss and heartbreak without saying a word.

In all, Mr. Robot is exceedingly good. Esmail tells the story he was born to tell, and Malek gives the performance of a lifetime to make a truly magnificent ten hours of entertainment. While it may not be entirely perfect (its social commentary is laid on a little too heavily in the first few episodes), it is undeniably excellent, and if it can maintain its excellence it will become one of those shows which goes down in history, which defines an era in television. I truly hope it does.

The first season of Mr. Robot (2015) is released in its entirety on Amazon Prime Instant Video.