Read more
You are at:Home»Culture»Review: The Girl On The Train by Paula Hawkins
By Georgia Simpson on October 8, 2015 Culture, Literature
100%
100
Gripping

The Girl on the Train is a fantastic thriller with astounding plot twists, putting Gillian Flynn's Gone Girl to shame.

For a first time writer such as Paula Hawkins, it’s pretty astonishing that her debut novel not only took the top spot on Amazon’s best sellers list, but that it is also being compared to Gillian Flynn’s runaway success Gone Girl. The novel in question, is the book that was a summer hit amongst thriller readers and took the female driven narrative to a whole new level, The Girl on the Train.

The Girl on the Train introduces our drunk protagonist Rachel, on her commute home from London. Everyday on her journey, Rachel is taken on a familiar route along a street of back gardens. One of these gardens used to belong to her and her ex-husband Tom, whom now lives with his new wife Anna and their baby girl. To distract herself from her longing for her ex-husband and the life they once had together, Rachel focuses on a house further along the street, number 15, and becomes obsessed with the young couple whom she affectionately names Jess and Jason.

Everyday Rachel passes ‘Jess and Jason’s’ house, dreaming of the idyllic life they must have together. Until one day she see something suspicious in there garden, followed by a newspaper headline about the disappearance of Megan – aka Jess. In her drunken state, Rachel decides to tip off the police, convinced that Scott – aka Jason – must be the prime suspect. Of course, all is not that simple. 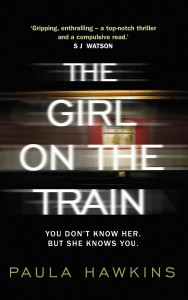 Hawkins has created a bold, yet flawed character in the form of her protagonist, making her both likable and frustrating. Her alcoholic tendencies are only the start of Rachel’s flaws, with her obsession with her ex-husband, her inability to hold down her job and her urine-soaked underwear, all making her a bleak and undesirable heroine, but she is still intriguing. On her quest to solve Megan’s disappearance, she learns that those that appear to have there lives most put together, are the ones that are most likely to be falling apart.

Rachel is not the only flawed person in the novel, as all of the characters – especially Megan and Scott  – have at least one major flaw, which subsequently leads to their downfall. Such as Megan’s manipulation of men from both her past and current lives and Anna’s vindictiveness towards Rachel. Hawkins has created three women, each vastly different, but all unreliable and carrying copious about of baggage.

Overall, the novel is a climatic thriller which deals with time scale and characters to a perfect degree. It builds up the correct amount of suspense needed, without ever being over-drawn or too obvious for the reader. The finale is extremely strong and fulfilling, unlike the last quarter of Flynn’s Gone Girl, which left readers disappointed and dissatisfied with the outcome.

It is therefore no surprise, that The Girl on the Train has gone on to have international success. Nor is it a surprise that it will be adapted to the big screen, with Emily Blunt taking on the role of the Rachel and Rebecca Ferguson playing the mistress-turned-wife, Anna.

The Girl on the Train is written by Paula Hawkins and was published by Doubleday in the UK in 2015.