Super Mario Maker makes great use of the Wii U's hardware and is one of the year's most enjoyable games.

Super Mario Bros. made its debut in 1985 and now, 30 years later, players can finally create and share their own Mario levels with the world. The innovative use of the gamepad and the robust online features, as well as the franchise’s always excellent platforming, make this a must buy for fans of Mario or level designing in general.

Most of the game revolves around the gamepad. Super Mario Maker feels like the first time the unique controller has been able to justify its existence. Most content creating games use buttons and analogue sticks to create a course, making the process of creating feel rather stagnant and arduous. The gamepad on the other hand, allows you to quickly drop assets into the level using the stylus and easily layout the infrastructure of your own stage. 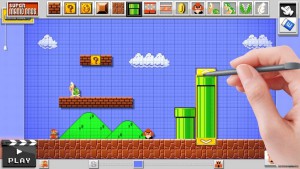 The tool-set available to you is huge and allows you to use enemies and objects from all of Mario’s long history. You can set your level in one of four incarnations of Mario’s most famous styles, such as Super Mario Bros. 3 or the 1985 original. Visually it’s fun to see newer elements that were not added until later installments, being recreated in the original’s 8-bit style and it is extremely satisfying to play old-school Mario on a high definition television. Overall Super Mario Maker offers one of the best and the most accessible level creators in any game.

If you simply want to play user created stages, then Super Mario Maker caters for that too. It provides a table of the best rated content creators, the most promising up-and-comers, and the most popular courses. To quickly play through several levels, you can tackle courses in the simulation of a standard Mario World. The modes force you to complete between 8-16 courses in 100 lives, on various modes of difficulties. Luckily there is an option to skip a level if it’s too hard. It’s essentially an endless pool of Mario levels, the only slight hindrance being the varying degree of quality. Some levels seem like they exist solely to frustrate you, but of course that is part of the fun of user created content. 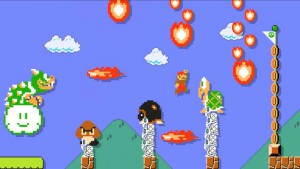 Little needs to be said about the actual gameplay. The platforming is as good as ever, with each of the four versions of Mario bringing their own abilities. For example, in Super Mario World you can spin-jump, but you can’t in Super Mario Bros.3. Meanwhile you can only wall jump in New Super Mario Bros. All unique power-ups, like the raccoon suit or cape, remain in their respective game styles.

There are some elements to the design that negatively affect the game overall though. My biggest gripe is that when you die, you fade to black and see your lives deplete by one. This is standard in any Mario game, but the trial and error gameplay on harder difficulties would make immediate respawns much more convenient. Stemming from this, there are no checkpoints available in the game either and these two things combined can lead to unnecessary frustration.

Nonetheless, Super Mario Maker fulfills the desire of anyone who has ever wanted to create a Mario level. It also provides great fan service for anyone who has enjoyed the Plumber’s different incarnations across his three decade long history. The gamepad makes the act of creating accessible, with little frustration, while the online components make jumping into other people’s creations a breeze. Small design choices hinder the gameplay, but are only ever magnified when the challenge is intense. Super Mario Maker proves that the Wii U is still a relevant console. It is one of the year’s most enjoyable releases and can easily be played by gamers of any generation.

Super Mario Maker is available now on the Wii U.